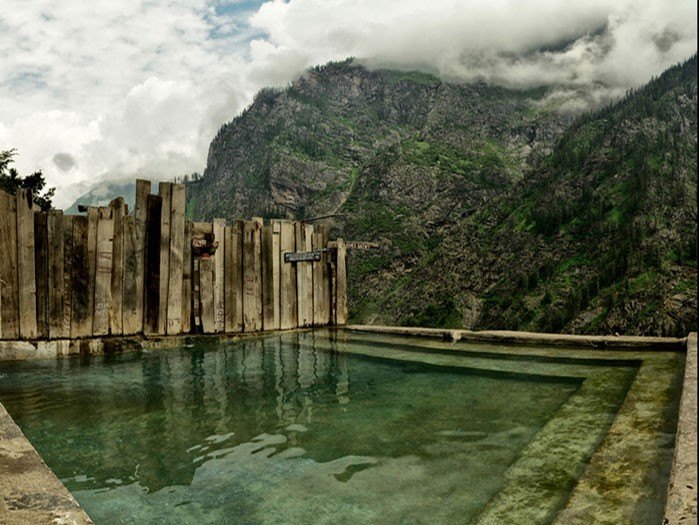 At a distance of 64 km from Kullu, 56 km from Bhuntar, 22 km from Manikaran and 102 km from Manali, Khir Ganga is a small village situated in Parvati Valley situated at an altitude of 3050 m. It has to be reached from Barsheni by 11 km trek and usually a 2 day trip from Kullu / Barsheni. Khir Ganga is one of the best trekking sites in Himachal Pradesh.

Khir Ganga is a holy place with a hot water spring. There is a temple dedicated to Lord Shiva and Goddess Parvati. According to legend, Kartikeya the younger son of Lord Shiva and Parvati meditated for a thousand years at Khir Ganga making it an important religious place for Hindus.
Kheer Ganga or Khir Ganga name came due to the milky waters of the Parvati River flowing into Parvati valley. The valley is very abundant in water resources and a Hydel Power Project is coming up in the village of Barsheni.

Kheer Ganga trek starts from the village Barsheni which is reachable from Manikaran. From Barsheni about 11 km trek is needed to reach Kheer Ganga. Hiring a guide to trek this route is recommended. At Barsheni one can see the confluence of Tosh River and Parvati River. While trekking from Barsheni, travellers can visit attractions like Rudra-Nag, the serpent shaped waterfall, the rock formation of Pandu Pul and the Pin-Parvati Pass (5400 m). The Pin Valley National Park is another tourist attraction and is known for its resident wildlife population including snow leopards. This is usually a 2 day trek from Barsheni / Kullu.

The trek is very pleasant and offers some excellent views. After climbing the Kheer Ganga, a quick bath in the hot spring relaxes the mind and body. The view of the sunset apart from trekking through Kheer Ganga forests are an incredible experience. There is no electricity in Kheer Ganga and the lights are all run on solar power. It is recommended to carry enough food while trekking this place. Kheer Ganga is infamous for the marijuana that grows here which is known as Charas. Kheer Ganga is a favourite with the hippies and off late, it has become popular with the Israelis.

There is an ashram near the Shiva temple that offers basic accommodation facilities. There are a few restaurants along the road near Kheer Ganga that serve vegetarian and non-vegetarian cuisine.

The best time to visit Kheer Ganga is between May and November when the weather remains pleasant and favorable. Kheer Ganga remains snow-covered during winters and only gets temporary settlement during summers.