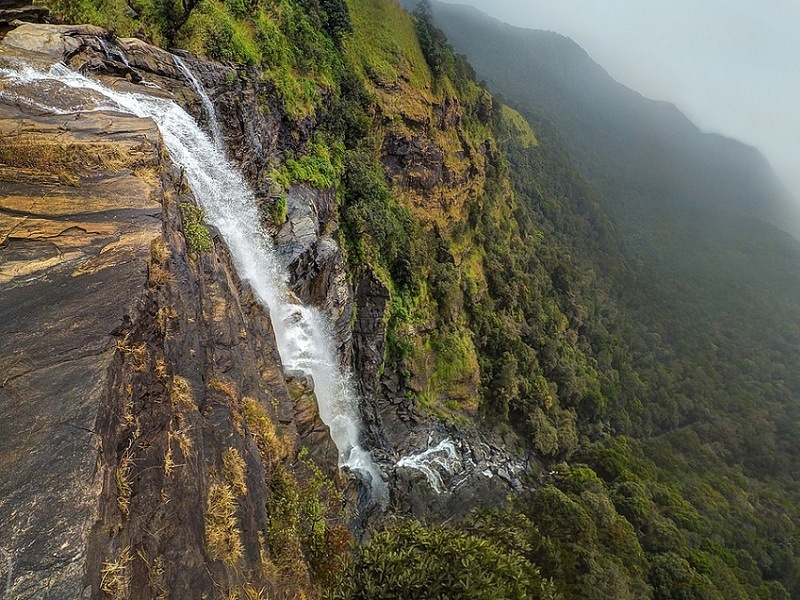 #26 of 33 Places to Visit in Chikmagalur

At a distance of 4 km from Ballarayanadurga Fort, 9 km from Kodige Falls, 45 km from Mudigere, and 75 km from Chikmagalur, Bandaje Falls is a mesmerizing waterfall located in the Charmady Ghat section of the Western Ghats in the Belthangady taluk of Dakshina Kannada district, Karnataka. It is one of the stunning waterfalls in Karnataka, and among the must-include places in Chikmagalur holiday packages.

Also known as Bandaje Arbi Falls, Bandaje Waterfall is formed by a tributary of the Netravathi River. It plunges 200 feet from the hilltop and is a surreal sight to behold. The waterfall continues its journey downhill as a single stream to join the river Netravathi as a tributary. It is one of the most magnificent natural treasures of the Western Ghats hidden among a blanket of greenery on top of the hills. The majestic waterfall is as famous for its natural beauty as for being a junction of various trek routes. Permission from the Belthangady wildlife range office, Kudremukh national park is required to trek to Bandaje Falls.

The waterfall is located in a remote area of Western Ghats and can be reached only by undertaking trekking in thick forests and grasslands with the help of local guides. A trekker's delight, there are two different routes to reach the falls. If you are travelling via Mangalore - Ujire, it is located 25 km from Ujire. The trek generally starts from Valambra near Somanthadka village (7 km from Ujire) at the base of the hills. The uphill journey passes through difficult terrain but the surrounding natural environment is a pleasure for the eyes. Many trekkers tire out before reaching the falls at the end of the 15 km long trek (one way).

Another trekking route passes through Ballarayana Durga Fort. The trail starts from Kalabhairaveshwara Temple at Durgadahalli, which is around 38 km from Mudigere. The route from the temple to the initial forest section (from where the actual trek starts) is on a moderately steep mud road. Jeeps and other SUVs can go all the way up to the start point covering a distance of 1 km else just park your vehicle at the temple and start trekking from there. The fort is about 3 km from the temple. The trek to the fort is a difficult one and takes about one and a half-hour. From Ballarayana Durga Fort, the waterfall is about 4 km and takes about two and a half hours. The entire trail from the fort to the waterfall is on rolling hills that consist of a vast expanse of grasslands with thick, dark green forests in patches. The first glimpse of the water gushing through rocks is a sight for sore eyes.

Since the waterfall is located within dense jungles of the Western Ghats, there is no arrangement for tourists to stay near the falls. But the natural site offers enough space for everyone to enjoy a camping adventure. The cool breeze, clear sky filled with the stars, light music in the background had set up a perfect camping experience.