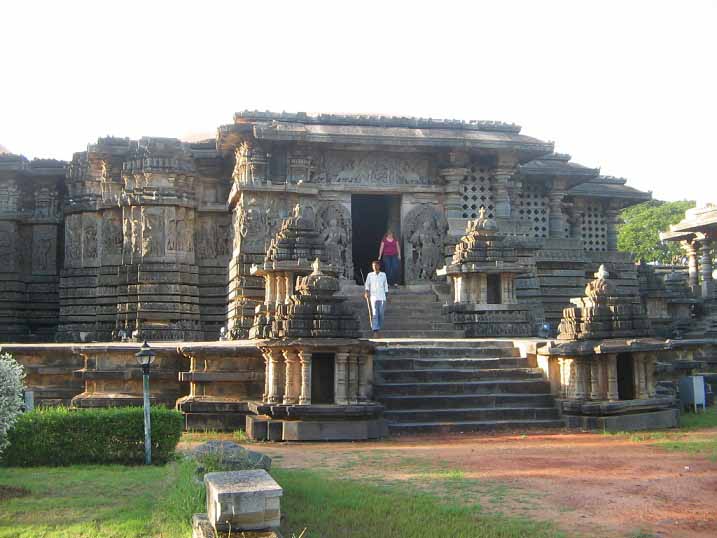 Halebidu was the glorified royal capital of the Hoysala kingdom in the 12th Century. Halebidu, which was previously called Dorasamudra or Dwarasamudra, got the name 'Halebidu' literally meaning 'The Old City' because it was ruined two times during the invasion of Malik Kafur. The temple town comprises two Hindu temples, the Hoysaleswara, Kedareswara temples, and two Jain basadis. There is an archeological museum in the temple complex. These temples are surrounded by a big lake. Soapstone / Chloritic Schist was used for the construction of these temples. Halebidu is one of best places to visit near Bangalore.

The Hoysaleswara temple, dedicated to Lord Shiva, is built on a star-shaped platform. This temple enshrines Hoyasaleswara and Santaleswara. Ketumalla, a minister of Vishnuvardhana the Hoysala ruler, built the Hoyasaleswara temple during 1121 AD and attributed it to his king Vishnuvardhana and Queen Shantala Devi. The construction of the temple took about 105 years to complete. The walls of the temple are covered with an endless variety of depictions from Hindu mythology, animals, birds, and dancing figures. Each sculpture in the temple is unique and beautifully carved. Another popular place to visit in Halebidu is the Kedareswara temple dedicated to Lord Shiva. This was built by King Ballala II is considered to be a gem of architecture. It was decorated with sculptures and panels in typical Hoysala style. The basement shows the rows of elephants, horses, lions, and an imaginary animal called Makara.

Mangalore Airport is the nearest airport, which is 185 km from Halebid. The nearest Railway Station is at Hassan, which is about 32 km from Halebid. It has trains from Dharwar, Cannanore, Bangalore, Mysore, Shimoga and Arsikere. Hassan is the base station to travel to Halebid and it is well connected by bus with Halebid. Hassan is linked with Belur, Halebid, Chikmagalur, Shravanbelgola, Bangalore, Mangalore, and Mysore by bus.

Hoysala Mahotsava, a dance festival is held in the temples of Belur - Halebid in March every year. It is one of the important festivals in Belur and Halebid. This place can be visited throughout the year. Usually, it takes 2-3 hours to visit temples in Halebid.

How to Reach Halebidu - Full Details

Top 10 Places to Visit in Halebidu

#1 of 7 Places to Visit in Halebidu

At a distance of 0.5 km from Halebidu Bus Station, Hoysaleswara Temple is an ancient Hindu temple situated at Halebidu. It is one of the prime places to visit in Halebidu, and among the popular places of heritage in Karnataka.

Built-in Hoysala style of architecture, this temple is listed in UNESCO World Heritage Site along with other Hoysala temples at Belur & Somnathpur. Built-in 1121 AD, the temple has two shrines, one dedicated to Hoysaleswara and another for Shantaleswara named after Shantala Devi, the queen of King Vishnuvardhana.

Standing on a star-shaped platform, the temple is made out of soapstone. Both the shrines are located next to each other with a common portico. The shrine comprises Shiva Linga which is still worshipped. The halls comprise huge images of Nandi, the attendant of Lord .....

#2 of 7 Places to Visit in Halebidu

The Veera Narayana temple was built in the 13th century by the Hoysala King Veera Bhallala II. This temple is dedicated to Lord Vishnu in three different forms. While Belur and Halebid are famous for their intricate sculpture, this temple is one .....

#3 of 7 Places to Visit in Halebidu

At a distance of about 1 KM from Hoysaleshwara Temple in Halebid, Kedareshwara Temple is a Hoysala temple built by King Ballala II and his younger Queen Abhinava Ketala Devi in 1319 AD.

Kedareswara Temple is a fine example of Hoysala style of temple architecture. The carved ceilings of the temple are supported by finely polished pillars. The magnificent idol of Nandi Vahana in its lying posture adds extra elegance to the temple. Unfortunately portions of the temple collapsed and they are never restored again.

The main shrine is raised over a beautiful star-shaped platform of smooth stone. The walls, the tower, the doorway and the ceiling are magnificently carved. As seen in Hoysaleswara temple, this temple has classic friezes and scenes from the epics.

#4 of 7 Places to Visit in Halebidu

The Parshwanatha Swamy figure is made out of black stone and it is 14 feet in height. A seven-headed serpent carved at the head of this figure appears to be guarding the deity.

#5 of 7 Places to Visit in Halebidu

At a distance of about 0.5 Kms from Hoysaleshwara Temple in Halebid, Archaeological Museum is situated in front of the Hoysaleswara Temple. Established in early 1970s, this museum has more than 1500 sculptures & inscriptions of historical significance recovered in and around Halebidu.

The collection is displayed in a closed sculpture gallery as well as in an open air museum with a large reserve collection. It also display 18 feet Tirthankara image from the ruined tank of one of the Jaina basadis. The open air museum has in its display many sculptures of importance like Govardhanagiridhari Krishna, Dancing Shiva, Nataraja and Veena Saraswati, dancing Ganesha, etc.

Most of the artifacts exhibited in the museum are from 12th - 13th century.

Timings: 9 AM to 5 PM, Closed on Fridays

#6 of 7 Places to Visit in Halebidu

Among the most popular tourist places to visit near Bangalore, Belur .....

#7 of 7 Places to Visit in Halebidu

This place is named after the pond in the middle of the town (Bela-Kola means White Pond). Shravanabelagola is famous for the Bahubali Statue, among the must include places in Shravanabelagola tour packages. With a height of 58 feet carved out of a single block of granite, the statue is supposed to be the tallest monolithic stone statue in the world. The statue was carved during the period of Chamundaraya, a minister of the Ganga King Rajamalla between 982 and 983 CE. The nude statue of Bahubali is carved carefully .....