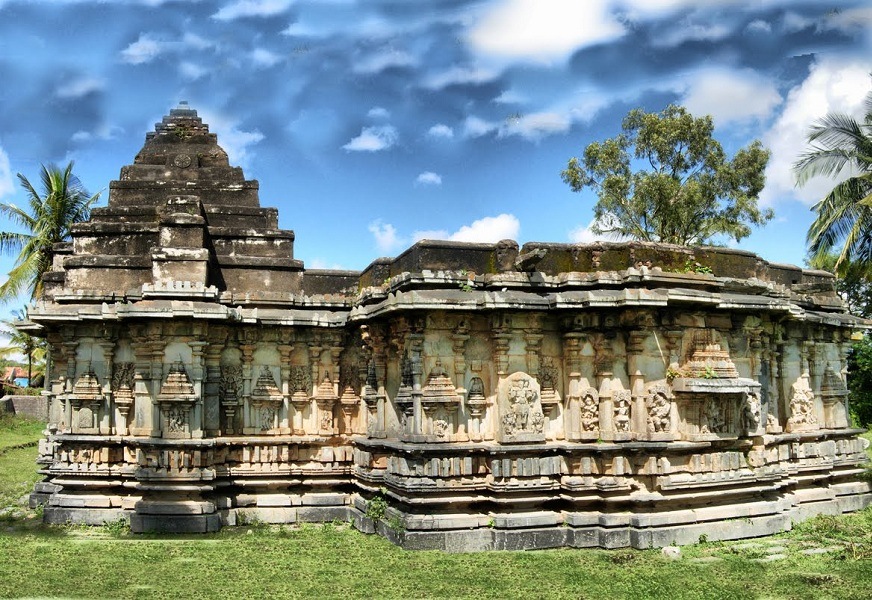 #16 of 33 Places to Visit in Chikmagalur

At a distance of 12 km from Chikmagalur, 18 km from Belur, and 55 km from Hassan, Marle Temples are the twin ancient temples located at Marle village in Karnataka. Situated between Chikmagalur, and Belur, these are among the lesser-known Hoysala temples in Karnataka, and among the top places to visit in Chikmagalur.

The twin Keshava and Siddeshwara temples of Marale are lesser-known jewels of the Hoysala architectural style. Located side by side, the temples are said to have been built around 1150 AD and represent Ekakuta style. Two huge stone edicts placed atop a pedestal between the two shrines highlight the details of their construction and consecration. Although some pillars are beautiful, some portions of the walls are damaged and some carvings are intact, and some incomplete.

The Keshava Temple is the more ornate of the two with its outer walls bedecked with several intricate designs. A miniature stone tablet placed on the entrance door lintel carries a beautiful portrayal of Lord Vishnu and his consort Lakshmi flanked by Jaya and Vijaya. The interior of the temple follows the basic Hoysala architectural style consisting of the mukhamantapa, antarala, and the sanctum sanctorum. The mukhamantapa contains intricately carved pillars with perfectly lathed curves. The antarala surpasses this in construction and consists of finely finished pillars that are quintessential in Hoysala temples. Embedded into the antarala's ceiling is a beautiful stone panel carved with an illustration of the ashtadikpalakas surrounding Vishnu, which is placed in the center panel. The sanctum sanctorum is equally fascinating and houses a captivating six-foot-tall idol of the deity molded-in saligrama stone. The temple has intricate designs and motifs that show a similitude with mandapas.

Dedicated to Lord Shiva, the less ornate Siddeshwara Temple resembles the Keshava Temple in appearance. It has a similar lintel panel showing Lord Shiva with Parvathi accompanied by Lord Ganesha and Subrahmanya. It is a little closer to the typical Hoysala shrines and is covered with the sculptures of several deities like Subrahmanya, Ganesha, and Mahishamardhini along its walls. One interesting feature that stands out amongst these is a depiction of a small boy, armed with a dagger, attacking a man in the presence of a linga.