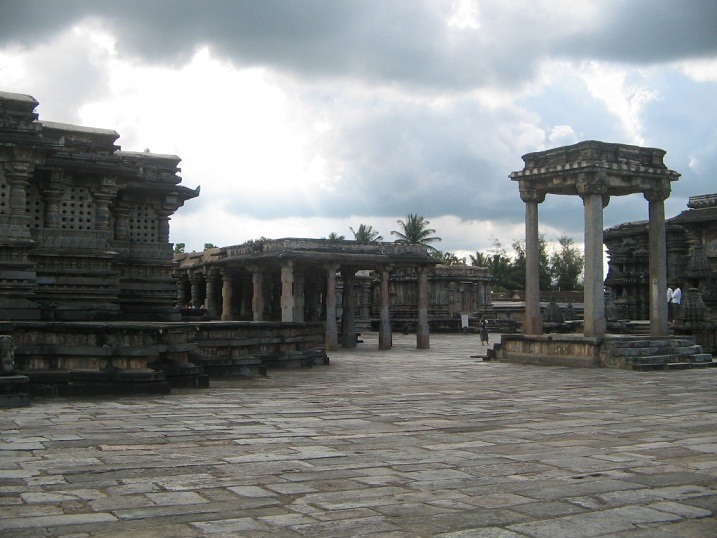 Among the most popular tourist places to visit near Bangalore, Belur was the early capital of the powerful Hoysala Empire on the banks of River Yagachi. As per inscriptions found here, Belur was formerly called Velapuri. Hoysalas were initially under the control of Chalukyas and build their kingdom after the fall of Chalukyas. The Hoysala dynasty originally had their capital at Halebid where they ruled for over 150 years. However, it was invaded by Malik Kafur in the 14th century, plundered to poverty and ruins. Thus, the Hoysalas shifted their seat of power to Belur.

Belur can also be visited along with Chikmagalur packages. The Chennakesava temple is one of the finest examples of Hoysala architecture. It was built by King Vishnuvardhana to celebrate his victory over the Cholas at Talakad in 1117 CE. It took 103 years to complete the temple and Vishnuvardhana's grandson Veera Ballala II completed the task. Standing on a star-shaped platform, the temple has three doorways. There are two more shrines for Soumyanayaki and Ranganayaki, consorts of Sri Chennakesava. There is a Pushkarni or stepped well to the right side of the main entrance. The Dravida style raja gopuram at the entrance was a later addition by the Vijayanagar kings.

The facade of the temple is filled with intricate sculptures and friezes with no portion left blank. There are about 48 pillars of various sizes, shapes, and designs, bearing testimony to remarkable artistry. Narasimha Pillar is an example of the fine artwork done by Hoysala artists. The main highlight of the temple is Darpana Sundari or The lady with the mirror. There are four well-known bracket figures on the ornate ceiling that are inspired by Shantaladevi's well-endowed beauty. Visitors can see several carvings depicting episodes of Mahabharata, Ramayana, and the Upanishads. Sculptures of birds and animals also can be seen. The beautiful sculpture of Shantaladevi is placed on the circular platform in front of the shrine. It is unique for its hollow and movable jewellery. Yagachi Dam, Halebidu, and Narasimha Pillar are the other places to visit in Belur.

Mangalore Airport is the nearest airport, which is 174 km from Belur. The nearest Railway Station is at Hassan, which is about 24 km from Belur. It has trains from Dharwar, Cannanore, Bangalore, Mysore, Shimoga, and Arsikere. Hassan is the base station to travel to Belur and there are frequent buses between Hassan & Belur.

Hoysala Mahotsava, a dance festival held in the temples of Belur and Halebid is celebrated in March. It is one of the important festivals in Belur and Halebid. This place can be visited throughout the year.

How to Reach Belur

How to Reach Belur - Full Details

Top 10 Places to Visit in Belur

At a distance of 0.5 km from Belur Bus Station, Sri Chennakesava Temple is an ancient temple situated at Belur, Karnataka. The temple is listed as a UNESCO World heritage Site and is one of the must-visit places as part of Belur Tour Packages.

Also referred to as Kesava or Vijayanarayana Temple of Belur, Chennakesava Temple is a Hindu temple dedicated to Lord Vishnu. The temple was commissioned by King Vishnuvardhana of the Hoysala dynasty in 1117 CE, on the banks of the Yagachi River in Belur, an early Hoysala Empire capital. The temple was built over three generations and took 103 years to complete. It was repeatedly damaged and plundered during wars, repeatedly rebuilt and repaired over its history.

Among the famous places to visit in Belur, the temple is very famous for extensive carvings, stone sculptures, artwork and its unique architecture. .....

At a distance of 2.5 km from Belur Bus Stand, Yagachi Dam is an earthen gravity dam situated near Belur in Hassan district of Karnataka. Famous for its water sports, the dam is one of the beautiful dams in Karnataka and also one of the popular places to visit in Belur.

The Yagachi Dam is built in 2001 across the River Yagachi, a tributary of River Kaveri. The length of the dam is 1280 m and the height is 26 meters. Situated at an altitude of 965 feet, the dam was constructed with the objective to harness water resource for the purpose of irrigation and to meet the demands for drinking water in Belur, Chikmagalur and Hassan districts.

The natural beauty of the landscape mesmerizes visitors. Tourists flock in large numbers to enjoy the beauty of the dam and the surrounding areas. The place is ideal to spend time away from the hustle and bustle of the city life. The cool breeze of the dam rejuvenates the mind and the body. Just sitting near the reservoir and watching the calm .....

Situated inside the Chennakesava Temple complex in Belur, the Narasimha Pillar is a magnificent stone pillar with a height of about 30 feet. All sculptures of the temple are carved on this pillar in a miniature form.

The pillar is made with soapstone. The base of the pillar is cubical in shape with floral decoration. It is believed that this pillar was once capable of rotating on its axis.

Note: This place is inside Chennakesava Temple complex

Inspired by Shantala Devi, Queen of King Vishnuvardhana, there are 42 Bracket Figures called as Madanikas (or Celestial Nymphs) carved out of soap stone placed in different corners of the Chennakesava Temple. All Madanikas are found in different postures of Bharata Natyam and carved to the minute detail.

Among these, four bracket figures placed inside the temple's ornate ceiling have become very famous and represent the true beauty of Hoysala's sculpture work. These four madanikas are known as Darpana Sundari - The Beauty with a mirror, The lady with the parrot, The Huntress and The Bhasma Mohini. There are 38 bracket figures placed on the outer walls which are the highlight of the temple's magnificent architecture. All the sculptures are carved with utmost care and clinical precision.

Note: This place is inside Chennakesava Temple complex

This place is named after the pond in the middle of the town (Bela-Kola means White Pond). Shravanabelagola is famous for the Bahubali Statue, among the must include places in Shravanabelagola tour packages. With a height of 58 feet carved out of a single block of granite, the statue is supposed to be the tallest monolithic stone statue in the world. The statue was carved during the period of Chamundaraya, a minister of the Ganga King Rajamalla between 982 and 983 CE. The nude statue of Bahubali is carved carefully .....

Halebidu was the glorified royal capital of the Hoysala kingdom in the 12th Century. .....

At a distance of 18 km from Halebidu, 21 km from Hassan, and 24 km from Belur, Lakshmi Devi temple is an ancient Hindu temple located at Doddagaddavalli village in the Hassan district of Karnataka. Situated on the Hassan - Belur highway, it is one of the stunning Hoysala temples in Karnataka, and among the top tourist places in Hassan.

Dedicated to goddess Lakshmi, the Lakshmi Devi Temple at Doddagaddavalli was built by a merchant called Kullahana Rahuta and his wife Sahaja Devi during the reign of King Vishnuvardhana in 1114 CE, and is one of the earliest known temples built in the Hoysala style. Built with soapstone, it is the only example of the chatuskuta (four-shrined) order of temples built during the Hoysala period. Each is complete with a shikhara, a sukhanasi (vestibule), a kalasa on the shikhara, and a Hoysala crest on the sukhanasi.

The temple complex has two entrances. The one on the east makes its way through a porch while the one on the west opens to the lake. .....

The Veera Narayana temple was built in the 13th century by the Hoysala King Veera Bhallala II. This temple is dedicated to Lord Vishnu in three different forms. While Belur and Halebid are famous for their intricate sculpture, this temple is one .....