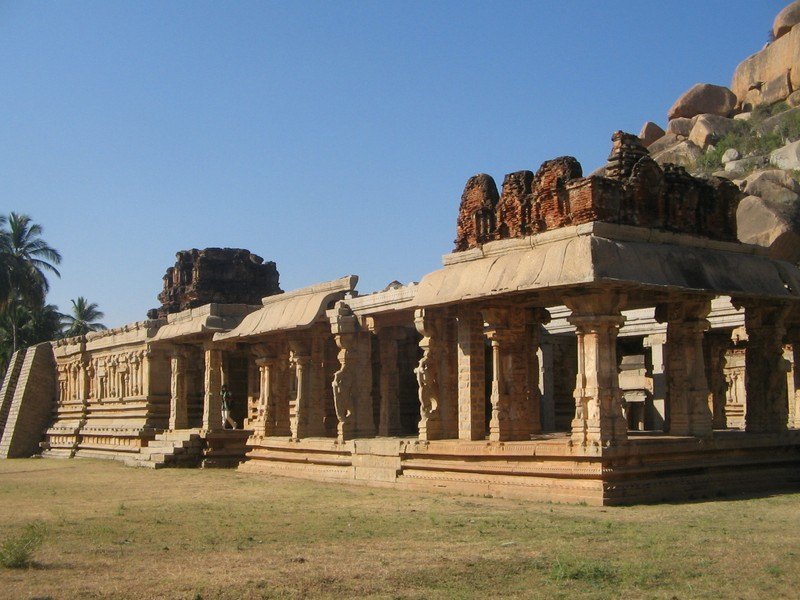 At a distance of 1 km from Hampi Bus Stand & 500 m from Hampi Bazaar, Achyutharaya temple is located between the Gandhamadana hill and Matanga hill. It is one of the last grand creations of the Vijayanagara dynasty before the fall of the empire.

The temple was built in Vijayanagara style architecture. This temple complex has two enclosures, each marked by an entrance tower. The main temple is situated within the second enclosure. The main temple consists of a garbhagriha, an antarala, sukanasi, a rangamandapa and an ornate Kalyana mandapa.

Like other Hampi temples, this temple also has a bazaar starting right at the doorsteps of the temple. This street is known as Courtesan Street or Soolai Street. Now, major part of the temple and its surrounding structures are in a ruined state. The main deity in the temple is missing and the sanctum of the temple is standing on pillars placed by Archaeology Department to support the dilapidated structure.

Achyuta Raya Temple can be reached either from Kodanda Rama Temple through the Courtesan Street or by crossing the Matanga Hill using the steps beside the Monolithic Nandi at the opposite end of the Virupaksha Bazaar.