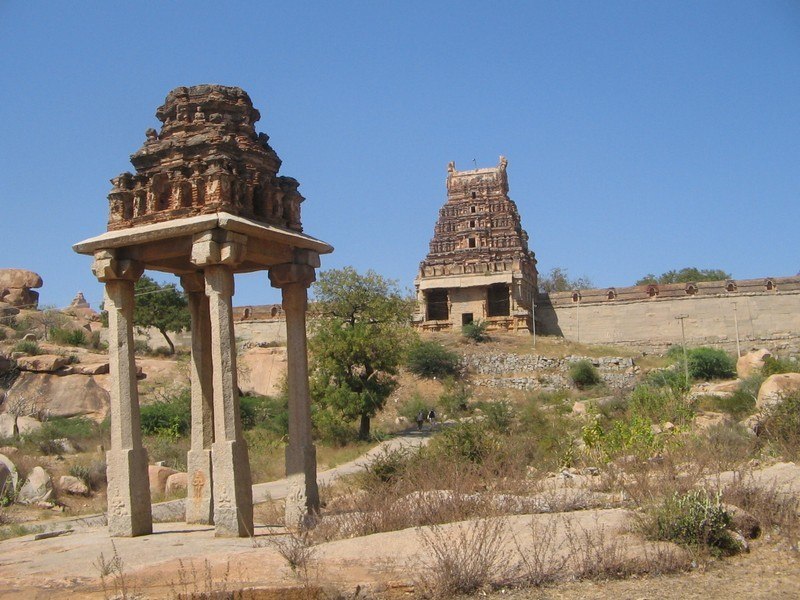 At a distance of 2.5 km from Kamalapura Bus Stand and 6 km from Hampi, Sri Malyavanta Raghunathaswamy temple is located atop the Malyavanta Hill. This temple is dedicated to Lord Rama.

Malyavanta Raghunathaswamy Temple was constructed by Krishnadevaraya of Vijayanagara Kingdom. According to mythology, Lord Ramachandra and his brother Lakshmana stayed here during the rainy season, in their search of Sita.

This 16th century temple was built around a huge boulder in Dravidian architectural style. The east facing temple consists of a sanctum, porch, a large pillared pavilion and a large pillared hall with a large courtyard. There are two gopuras at the temple's entrance. The main shrine consists of Lord Rama, Lakshmana and Sita's idols with the idol of Lord Hanuman kneeling close to them, all carved out of a single boulder. A gap found on the floor is filled with water, which is said to be made by Lakshmana with his arrow. Right behind the temple is a cave temple dedicated to Lord Shiva with a small Shiva Linga.

The temple has motifs of fish and marine creatures carved along its outer walls. A steep road leads to the temple of Raghunathaswamy, one of the few temples in Hampi which has been active since its inception. This temple is one of the ideal places to watch the mesmerizing scene of the sun setting amidst the huge boulders or monuments can be observed.