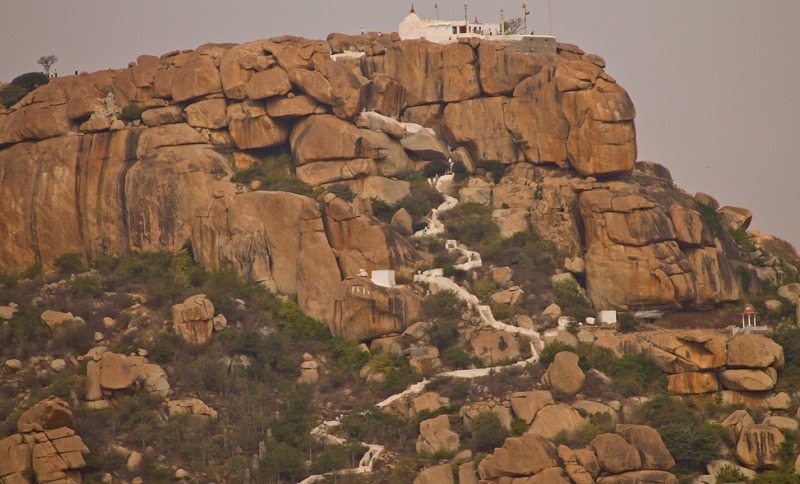 At a distance of 1 km from Hampi Bus Stand, Matanga Hill is located at the eastern end of the Hampi Bazaar. It offers a breathtaking view of the ruined city and the beautiful landscape below.

Matanga Hill is one of the major places to visit in Hampi. Being the highest point in Hampi; this is the best spot to get an aerial view of Hampi and its surroundings. There is a small temple on the top of Matanga Hill. On the way down there is a small cave marked where it is believed that Sugriva, ruler of Kishkinda, used to hide.

According to mythology, Matanga Hill is one of the holy places described in the epic Ramayana as the base of Saint Matanga. It is also the place where Sugriva benefited from the magical protection of the sage Matanga who had placed a curse of death on Vali, if he dared enter the area of Matanga Hill.

Being the highest peak in Hampi, the hill is a trekker's delight and offers pleasing views of the entire town below. There are many trekking paths that lead to the top of the hilltop where the Veerabhadra Temple is located. The climbing can take around 30 minutes. The roof top of the Veerabhadra Temple is the ideal place for sunrise and sunset view. From the top of the hill, one can view the Achyutaraya Temple, Tungabhadra River, Virupaksha Temple, Hampi Bazar and surroundings.

One major thing to be noted about the Matanga Hill is the stepped ramp at the western side. Most popular track passing at the base of the hill is the track between Hampi Bazaar and Achyutaraya Temple. There are many trials that lead to the bottom of the foothill. The most prominent of it is that which leads to the east which closes at the Kadalekalu Ganesha temple. The next popular trail is to the east end of Hampi Bazaar Street.