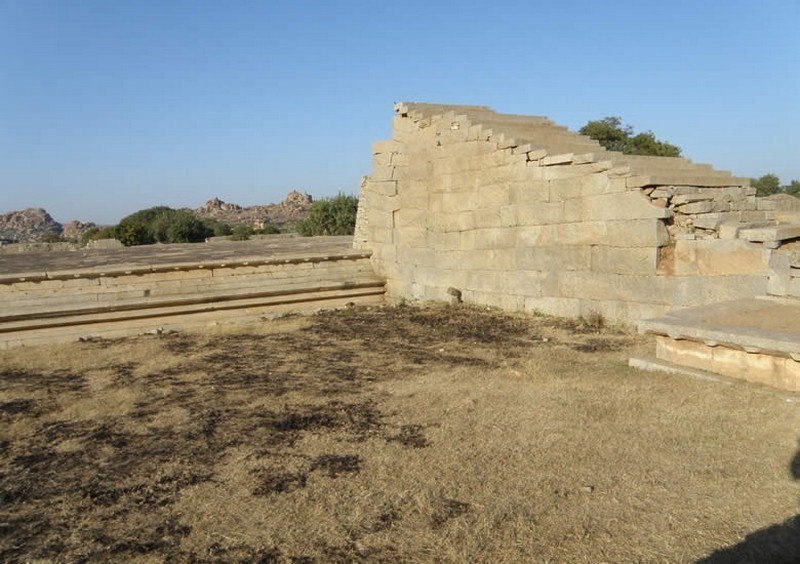 At a distance of 3.5 km from Hampi Bus Stand and 2 km from Kamalapur Bus Stand, The King's Audience hall, also known as Durbar Hall is located inside the Royal Enclosure at Hampi. It is a ruined structure whose remnants can be spotted on the western side of the Mahanavami Dibba or Dasara Dibba.

The King's Audience Hall was a huge building built with huge blocks of stone and wood. The structure has a ruined stone stairway at the rear of the hall that suggests it might have been a two storied building. The super structure is not present right now. Vestiges of pillar sockets and bases show that it was originally a hall of 100 pillars. It is believed that the superstructure of the building was mostly made of wood and the pillars were carved out of sandalwood trees. It is believed that the building was destroyed by fire during the Deccan Sultanate attack in 1565 AD.

The southern side of this platform has a staircase rising from the ground level to a height of about 4.5 m above the floor level of the platform. These staircases were used by the royal ladies to gain access to the top storey of the audience hall to witness the Durbar. In front of the audience hall is a large paved court, where dancers, jugglers and wrestlers made their performances.

It is believed that several noblemen used to attend the court of the King of Vijayanagara held at the Durbar Hall. These noblemen used to come from near as well as far off places. Today, only the basement of the Hall is survived.