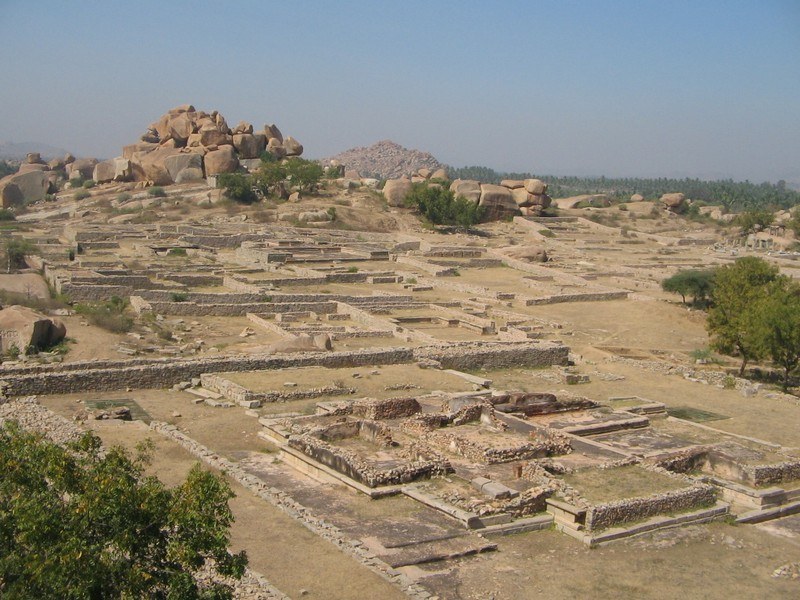 At a distance of 3.5 km from Hampi Bus Stand and 2 km from Kamalapur Bus Stand, The Royal Enclosure in Hampi is a huge fortified area that was once the heart of the Vijayanagara Empire.

This was the place where the royal family of the Vijayanagara Empire used to reside and the durbar used to be performed. Spread over an area of 59,000 square meters, it is believed to have once housed over 45 buildings, all used by the royal family. This center was separated from the main Hampi center by an irrigation canal. The sprawling area was protected by double walls. It had three entrances, two on the northern side and one on the western side.

The Royal Enclosure contains the ruins of several palace bases, water tanks, temples, ornate platform and canals and many other structures. Unlike the temples, which were constructed with stone, many of the palaces were built out of wood. The most impressive structure in the Royal Enclosure is the Mahanavami Dibba or the Dasara Dibba which is also known as the House of Victory. The King's Audience Hall or Durbar Hall can be seen in the northwest area. There is a stepped tank in the southeast and next to it is one more tank which was a bathing area.

The Hazara Rama temple, Granaries and Palace of Krishnadevaraya are some other ruins of Royal Center. Zenana enclosure is situated close to Royal Enclosure. The remains of a few granaries can be seen scattered near the Hazara Rama temple; these are used to store food grains. It contains numerous water tanks of various sizes which supplied water to the Stepped Wells and Private Baths. These water tanks were filled with an intelligently designed water supply and drainage system which can be seen even today.