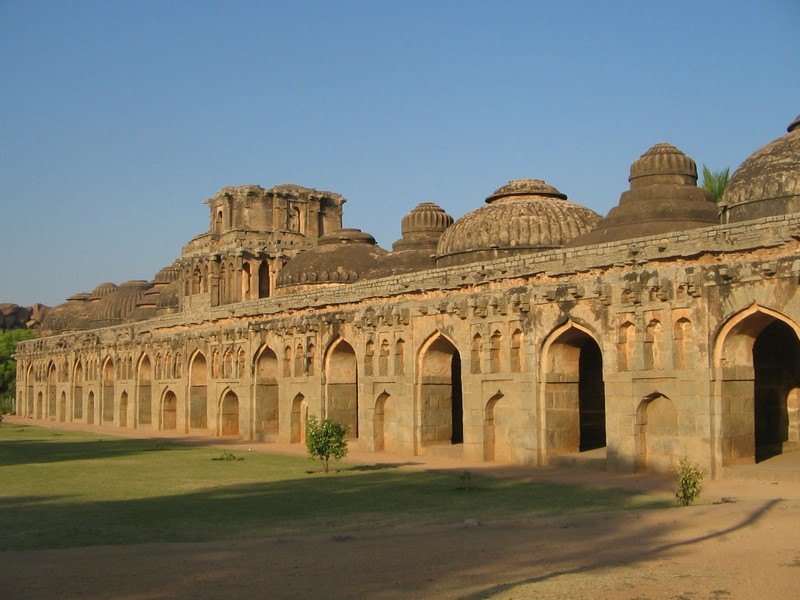 At a distance of 500 m from Hazara Rama Temple, 3.5 km from Hampi Bus Stand and 2 km from Kamalapur Bus Stand, Elephant Stable is an ancient monument located just outside the Zenana Enclosure in Hampi.

The Elephant Stable is an impressive structure that was used to provide shelter for the royal elephants of the Vijayanagara Empire. It is one of the very few structures not suffered the damage during Deccan Sultanate attack on Hampi and is a major attraction among the tourists.

This is a beautiful example of Indo-Islamic architecture. There are 11 domed tall chambers. The whole building looks symmetric with respect to this central hall. The center chamber is specially decorated and big. The other 10 domes represent the Islamic style of architecture. Each of the domes was decorated with ornate plaster on the interior as well as the exterior.

Metal hooks on the inside roof can be seen. The elephants were tied to these hooks from the center of the ceiling. At the rear of each hall are small openings for the mahouts to enter the elephant compartments. The open area in front of the building was a parade ground for the elephants.