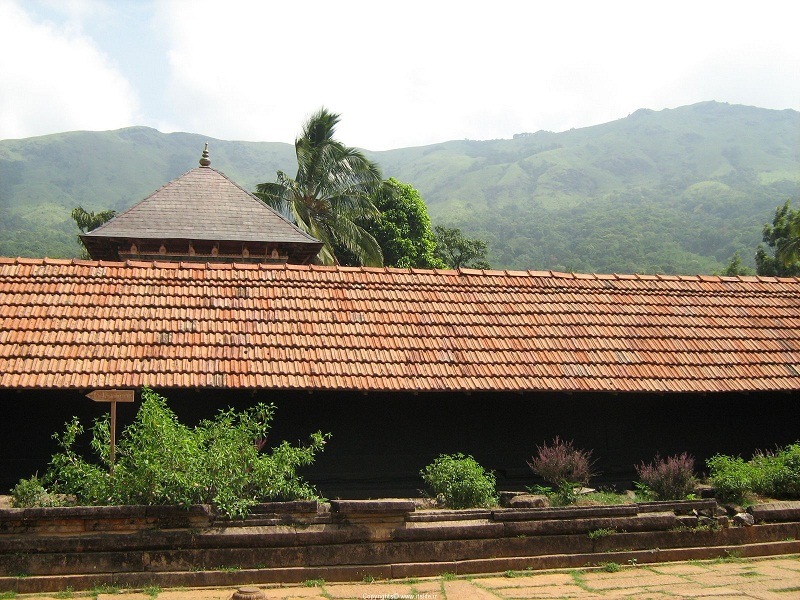 Travel Tips: This place can be visited along with Pakshipathalam (7 Kms) & Papnasini (1 Km)

At a distance of 22 km from Mananthavady, 28 km from Irupu Falls & 45 km from Kalpetta, Thirunelly Temple is an ancient temple located in a beautiful valley beneath Brahmagiri hill range close to Kerala - Karnataka border (near Kutta). It is one of the most ancient places of pilgrimage in Kerala, and among the most popular religious places to visit as part of Wayanad packages.

The temple is dedicated to Lord Maha Vishnu. Situated at an altitude of about 900 m, the temple is surrounded by mountains and beautiful forests. History depicts Chera king Kulasekharan as the founder of this temple. There exists documentary proof that Thirunelly at the time of Tamil Chera king Bhaskara Ravi Varma I (962-1019 CE) was an important town and pilgrim center in South India. In the dense jungles surrounding the temple, the ruins of two ancient villages can be found.

The name Thirunelli derives from Nelli, the Malayalam word for Indian gooseberry of the Amla tree. According to mythology, once Lord Brahma traversing the world on his hamsa saw an idol of Lord Vishnu set in an Amla tree. With the help of the Devas, Brahma installed the idol here and called it Sahyamalak Kshetra. Thirunelli Temple is also referred to as Amalaka temple and Sidha temple. People believe that Lord Brahma worships Perumal in the temple in the wee hours every day, hence the head priest of the temple leaves a fresh quantity of worshiping materials required for puja in the temple before closing the temple at night.

This 3000 years old temple is a fine specimen of classical Kerala temple architecture. Around 30 granite columns and granite paved floor make the temple an architectural wonder. The inner sanctum is surrounded by a tile-roofed structure and there is an open courtyard around the Sanctorum. Along the outer wall of the temple is a cloister made of granite pillars cut in cubical style. This part of the temple architecture is slightly unusual for a Kerala temple. The main deity idol of the temple is in the form of Chathurbhuja. Lord Ganapathi, Hanuman, Lord Shiva, Bhadrakali are also worshipped at this temple.

Among the famous Wayanad places to visit, Thirunelli Temple draws pilgrims from all over, primarily for ancestral rites. The rituals in this temple are performed on the banks of stream Papanasini, which originates from the Brahmagiri hills. It is believed that River Ganga and River Saraswathi join in Papanasini. A ritual dip in Papanasini is believed to wash one away, of all worldly sins committed in a lifetime. If we immerse the ashes of the dead in Papanasini, it is equivalent to that of doing Karmas in Gaya. It is believed that Parasurama also visited Thirunelli and performed the last rites of his father sage Jamadagni. He also took immersion in the Papanasini to wipe away sins committed to killing Kshatriyas.

At Papanasini there is a sacred rock called Pinnappara where ritual offerings to the spirits of the departed are made (known as Bali). It is almost 800 m away from the temple, on its western side. Pancha theertham is the temple pond seen on the temple premises. There is a boulder with the image of a footprint in the middle of the pond and it is called Vishnupada. On the western side of the temple is the cave temple Gunnika, dedicated to Lord Shiva. Thus Thirunelli becomes blessed by the unique presence of all the members of the trinity.

A two-day festival is celebrated on April 13th and 14th every year. Buses are available from Mananthavady.