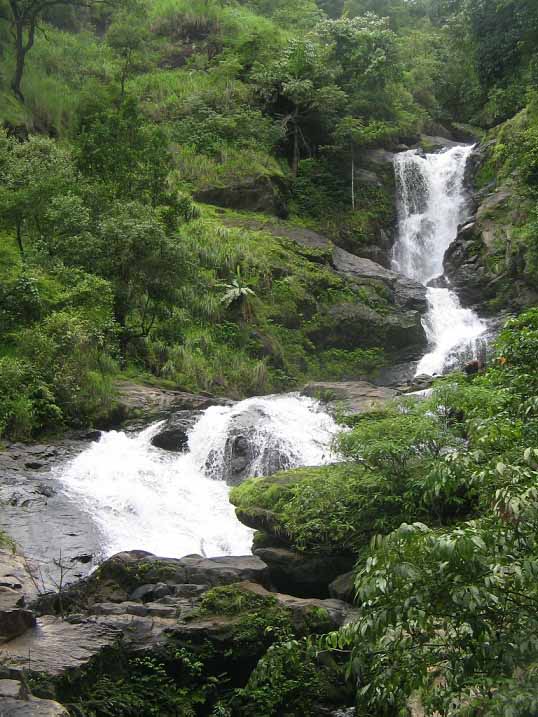 At a distance of 248 km from Bangalore, 110 km from Mysore, 75 km from Madikeri, 48 km from Virajpet, 32 km from Gonikoppal, 20 km from Nagarhole National Park, 10 km from Kutta & 10 km from Srimangala, Iruppu Falls is a magnificent waterfalls situated in Brahmagiri Hills between Srimangala & Kutta in Coorg district of Karnataka State, bordering the Wayanad district of Kerala. It is one of the best waterfalls in Karnataka and also one of the well-known Coorg tourist places. It can be visited as part of 2 day trip from Bangalore.

Dropping from a height of 170 feet through several stages, the falls are situated amidst thick forest of Western Ghats. The roaring waters of the Irupu Falls and the picturesque surroundings make it a favorite picnic spot. It is an unforgettable experience to stand at bottom of the cascades and play in the sizzling waters of the falls. Iruppu Falls is a part of the Brahmagiri forest range, there is a trek route that leads to the Narimale forest camp and then on to Brahmagiri Peak. Permission from forest department is needed for doing this trek.

There is a temple called Rameshwara Temple dedicated to Lord Shiva is located on the banks of the Lakshmana Tirtha River, enroute to the falls. It is said that Lord Rama himself installed the Shiva lingam inside the temple. This temple attracts a large number of pilgrims during the festival of Shivaratri.

The falls can be reached by taking a right diversion after Srimangala (while driving from Gonikoppal) between Srimangala and Kutta. The diversion is at about 2.5 km from Srimangala and road continues through coffee estates for another 6 km. Approach road is available till Rameshwara Temple which is the entry point to Brahmagiri Hills & Irupu Falls (an entry fee has to be paid here). From here, the falls is 15-20 minute walk through thick forest (the walk is easy through well laid path & steps). Private vehicles can be hired at Kutta or Srimangala to visit the falls (options are limited from Srimangala).

The falls is at its best in monsoon and post monsoon seasons. The best time to visit Iruppu falls are from August to January while the peak season is from September to December. Usually it takes half day to visit Iruppu Falls.

How to Reach Irupu Falls

#1 of 7 Places to Visit in Irupu Falls

At a distance of 10 km from Kutta, 20 km from Iruppu Falls, 62 km from Kalpetta, 88 km from Mysore, 88 km from Madikeri, and 218 km from Bangalore, Nagarhole National Park is one of the best wildlife sanctuaries in India and among the must include places in Karnataka Tour Packages. Also known as Rajiv Gandhi National Park, it is spread across Mysore and Kodagu districts in Karnataka.

Nagarhole National Park is one of the top attractions you must include in Coorg tour packages. Originally the forest area was the private hunting ground for the Maharajas of Mysore. It was converted into a sanctuary in the year 1955 covering an area of 258 sq. km and subsequently enlarged to include the adjoining areas of Mysore district and now extends over an area of 643 sq. km. Nagarhole got .....

#2 of 7 Places to Visit in Irupu Falls

#3 of 7 Places to Visit in Irupu Falls

At a distance of 12 km from Nagarhole National Park, 12 km from Irupu Falls, and 39 km from Kalpetta, Tholpetty Wildlife Sanctuary, also known as Wayanad Wildlife Sanctuary, is a sanctuary and Elephant Reserve in the Wayanad district of Kerala. It is one of the must include places in India wildlife tours and among the best Wayanad tourist places.

Established in 1973, Wayanad Wildlife Sanctuary was brought under the Project Elephant in the year 1991-92. The sanctuary is bordered with Nagarhole WLS & Bandipur WLS in Karnataka and Mudumalai WLS in Tamilnadu. Occupying an area of 345 sq. km, Wayanad WLS is the second largest WLS in Kerala and is now an integral part of the Nilgiri Biosphere Reserve. The sanctuary was set up with an objective of conserving the biological heritage of the region .....

#4 of 7 Places to Visit in Irupu Falls

At a distance of 13 km from Mananthavady, 26 km from Kalpetta, 35 km from Irupu Falls & 32 km from Sulthan Bathery, Kuruva Island, also known as Kuruva Dweep, is a protected river delta in Wayanad district of Kerala. Kuruva Dweep is being developed as eco-tourism project and is one of the popular places to visit in Wayanad.

Kuruva Island is a cluster of small islands formed by the delta in the River Kabini and is spread over 950 acres of uninhabited area. These are true natural islands with no other activities. Kuruva Island is densely populated with rich flora and fauna. Rare species of birds, orchids and herbs are the main attraction of the island apart from its breathtaking natural beauty. Several migratory birds are also seen on the island. The main island contains two small fresh water lakes. Other unique features of these islands are the bridges made .....

#5 of 7 Places to Visit in Irupu Falls

At a distance of 22 km from Mananthavady, 28 km from Irupu Falls & 45 km from Kalpetta, Thirunelly Temple is an ancient temple located in a beautiful valley beneath Brahmagiri hill range close to Kerala - Karnataka border (near Kutta). It is one of the most ancient places of pilgrimage in Kerala, and among the most popular religious places to visit as part of Wayanad packages.

The temple is dedicated to Lord Maha Vishnu. Situated at an altitude of about 900 m, the temple is surrounded by mountains and beautiful forests. History depicts Chera king Kulasekharan as the founder of this temple. There exists documentary proof that Thirunelly at the time of Tamil Chera king Bhaskara Ravi Varma I (962-1019 CE) was an important town and pilgrim center in South India. In the dense jungles surrounding the temple, the ruins of two ancient villages can be found.

#6 of 7 Places to Visit in Irupu Falls

At a distance of 7 km from Thirunelly Temple, 29 km from Mananthavady, 35 km from Irupu Falls & 52 km from Kalpetta, Pakshipathalam is an eco-tourist spot situated in the Brahmagiri hills of Wayanad district. Situated at an altitude of 1740 m, Pakshipathalam is one of the popular Wayanad tourist places and also one of the best places for trekking in Wayanad.

Pakshipathalam is the abode of large population of several species of birds. It is an ornithologist's paradise. The deep rock caves, formed among the thick blocks of rocks at the northern top end of the Brahmagiri, are the abode of various birds and wild beasts. The hill station of Pakshipathalam was once the meditating area for countless rishis or saints of ancient India. There is also a cave called Munikal Cave, where birds take shelter during night and early morning. The cave is also famous for the endangered species of birds known as 'Edible Nest Swift' which makes its .....

#7 of 7 Places to Visit in Irupu Falls