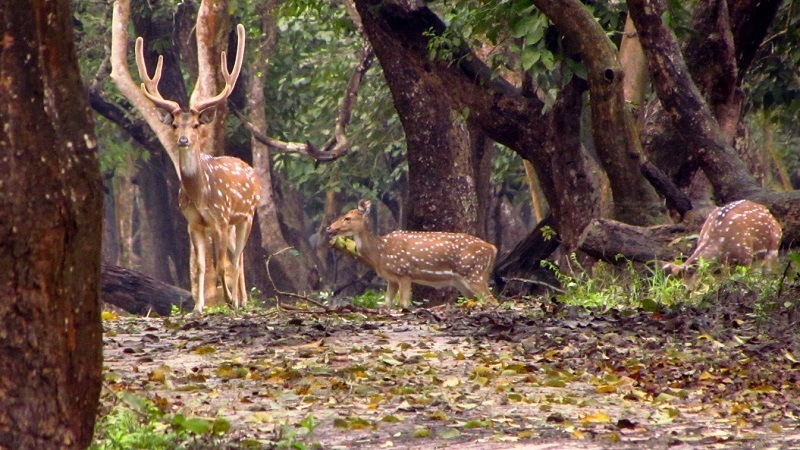 At a distance of 10 km from Kutta, 20 km from Iruppu Falls, 62 km from Kalpetta, 88 km from Mysore, 88 km from Madikeri, and 218 km from Bangalore, Nagarhole National Park is one of the best wildlife sanctuaries in India and among the must include places in Karnataka Tour Packages. Also known as Rajiv Gandhi National Park, it is spread across Mysore and Kodagu districts in Karnataka.

Nagarhole National Park is one of the top attractions you must include in Coorg tour packages. Originally the forest area was the private hunting ground for the Maharajas of Mysore. It was converted into a sanctuary in the year 1955 covering an area of 258 sq. km and subsequently enlarged to include the adjoining areas of Mysore district and now extends over an area of 643 sq. km. Nagarhole got National Park status in 1988 and declared as 37th Project Tiger Reserve in 1999. It is part of the Nilgiri Biosphere Reserve. The Western Ghats Nilgiri sub-cluster of 6,000 Sq. km, including all of Nagarhole National Park, is under consideration by the UNESCO World Heritage for World Heritage Site status.

Nagarhole is among the most popular places to visit near Bangalore, especially for wildlife buffs. This national park gets its name from two Kannada words Naga means snake and Hole means stream. Many serpentine streams flow through the rich tropical forests of the park, which has now been renamed as the Rajiv Gandhi National Park, after the late prime minister of India, Rajiv Gandhi. Nagarhole is situated to the north-west of Bandipur National Park which are separated by Kabini reservoir. The park has rich forest cover, small streams, hills, valleys, and waterfalls. Inside the park, coracle riding facility is available in Kabini River.

The park is usually closed for safaris during peak monsoon. Traffic movement is restricted from 6 pm to 6 am every day and the gates are closed on either side of the entry into the forest. Two-wheelers, three-wheelers, and goods vehicles are not permitted inside the park. Safaris are organized in the forest department vans during the morning and evening. Government-run 4WD safaris and boat trips are conducted from Kabini River Lodge, which are good options to explore the animals. The best time to visit Nagarhole National Park is Nov-May, especially Apr-May.

How to Reach Nagarhole National Park

#1 of 5 Places to Visit in Nagarhole National Park

At a distance of 248 km from Bangalore, 110 km from Mysore, 75 km from Madikeri, 48 km from Virajpet, 32 km from Gonikoppal, 20 km from Nagarhole National Park, 10 km from Kutta & 10 km from Srimangala, Iruppu Falls is a magnificent waterfalls situated in Brahmagiri Hills between Srimangala & Kutta in Coorg district of Karnataka State, bordering the Wayanad district of Kerala. It is one of the best waterfalls in Karnataka and also one of the well-known Coorg tourist places. It can be visited as part of 2 day trip from Bangalore.

Also known as Lakshmana Tirtha Falls locally, Irupu Falls or Iruppu Falls is another popular attraction not to .....

#2 of 5 Places to Visit in Nagarhole National Park

At a distance of 265 km from Bangalore, 117 km from Mysore, 132 km from Mangalore, 322 km from Coimbatore & 362 km from Kochi, Coorg or Kodagu is a district in Karnataka and Madikeri is the district headquarters. Coorg is one of the top places to visit in Karnataka, and among the must include places in honeymoon tour packages.

At an altitude of 1525 meters on the Western Ghats, Coorg is often called the Scotland of India. Talacauvery, Abbey Falls and Dubare are some of the best places to visit as part of Coorg Tour Packages. According to Puranas, Kodava is the redefined name of Krodhadesa meaning Land of Anger, said to have been inhabited by the Kodava tribe. Some historians believe that it is named after the River Cauvery. Coorg was under the Gangas rule during the 9th and 10th centuries and Cholas in the 11th century followed by .....

#3 of 5 Places to Visit in Nagarhole National Park

#4 of 5 Places to Visit in Nagarhole National Park

At a distance of 12 km from Nagarhole National Park, 12 km from Irupu Falls, and 39 km from Kalpetta, Tholpetty Wildlife Sanctuary, also known as Wayanad Wildlife Sanctuary, is a sanctuary and Elephant Reserve in the Wayanad district of Kerala. It is one of the must include places in India wildlife tours and among the best Wayanad tourist places.

Established in 1973, Wayanad Wildlife Sanctuary was brought under the Project Elephant in the year 1991-92. The sanctuary is bordered with Nagarhole WLS & Bandipur WLS in Karnataka and Mudumalai WLS in Tamilnadu. Occupying an area of 345 sq. km, Wayanad WLS is the second largest WLS in Kerala and is now an integral part of the Nilgiri Biosphere Reserve. The sanctuary was set up with an objective of conserving the biological heritage of the region .....

#5 of 5 Places to Visit in Nagarhole National Park