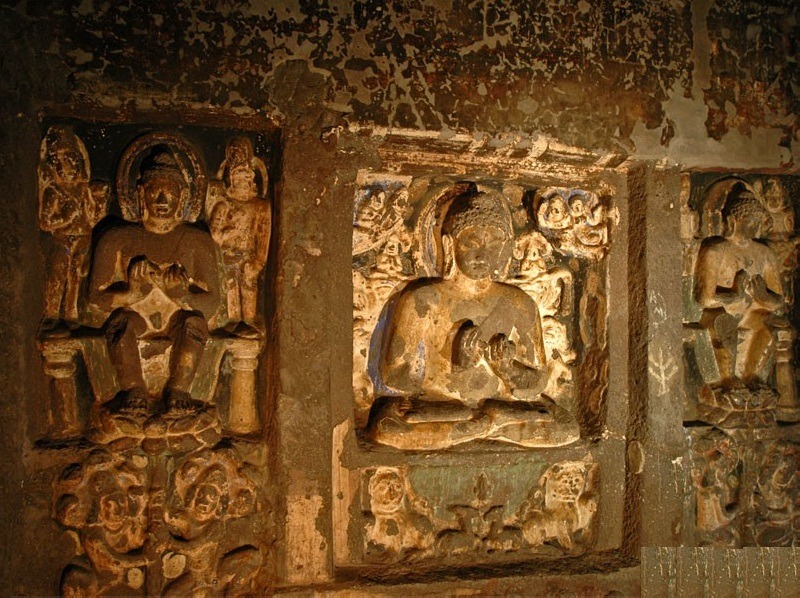 #4 of 14 Places to Visit in Ajanta Caves

At a distance of 650 m from Ajanta Foot Cave Bus Stop, Cave 16 is one of the popular caves situated in the middle of the Ajanta complex. Some of Ajanta's finest paintings can be seen in this cave and is one of the later Vihara caves.

Cave 16 is called the Welcome Gate of Ajanta. Two elephants are at the doorway to welcome the visitors. It also contains some renowned paintings like in Cave 1, 2 and 17. According to an inscription found here, the excavation of this cave was caused by Varahadeva, the minister of Vakataka king Harishena (circa AD 475-500).

The cave consists of a central hall surrounded by 14 cells on three sides, vestibule and a sanctum for Buddha image. Two elephant statues at the base of stairway lead to the cave. The inner shrine has a giant statue of Buddha seated on a throne in the abhayamudra or teaching gesture. Lions and other active animals support the throne. Bodhisattvas stand behind him. This cave gives a good view of the ravine.

The cave chamber is adorned with beautiful paintings. The portrait of the Dying Princess of this cave is one of the famous paintings of Ajanta. Sundari, wife of Buddha's half-brother Nanda, is said to have expired at the hard news that he husband was renouncing the material life, in order to become a monk. There is also the story of Sujata, who had offered a bowl of kheer to Siddhartha (the Buddha). It was his first food after he became the Buddha. There are also some more Jataka stories in this cave. The Hasti Jataka is the story of Bodhisattva as an elephant. He gave up his life by throwing down himself to provide food to those affected by hunger. In Maha-ummang Jataka, Bodhisattva settled a dispute between the two mothers claim for the same child. Some events of the life of the Buddha and Miracle of Sravasti are other paintings at this cave.