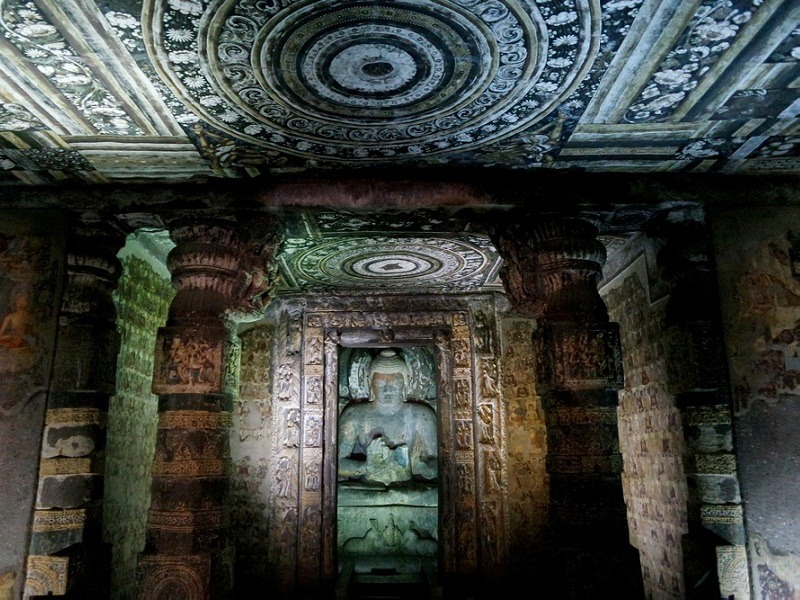 #2 of 14 Places to Visit in Ajanta Caves

At a distance of 400 m from Ajanta Foot Cave Bus Stop, Cave 2 is situated just beside Cave 1 in Ajanta. It is one of the famous and most visited tourist places in Ajanta.

Cave 2 is known for the paintings that have been preserved on its walls, ceilings, and pillars. It is one of the must include places in Ajanta tour packages. Its architectural plan is quite similar to the neighbouring Cave 1 and is in a better state of preservation. This cave consists of cells, sanctum sanctorum, and two pillared sub-shrines datable to 6th century AD. The facade of this Mahayana monastery cave shows the kings of Naga and their followers.

Cave 2 has a porch quite different from Cave 1. The cave is supported by robust pillars, ornamented with designs. The front porch consists of cells supported by pillared vestibules on both ends. The paintings on the ceilings and walls of this porch have been widely published. They depict the Jataka tales that are stories of the Buddha's life in former existences as Bodhisattva. The porch's rear wall has a doorway in the center, which allows entrance to the hall. On either side of the door is a square-shaped window to brighten the interior.

The hall has four colonnades which are supporting the ceiling and surrounding a square in the center of the hall. The colonnades have rock beams above and below them. The capitals are carved and painted with various decorative themes that include ornamental, human, animal, and semi-divine forms. A seated Buddha in dharmachakrapravartana mudra is enshrined in the sanctum, the side sub-shrines contain two Yaksha figures (popularly known as Sankhanidhi and Padmanidhi) to the east and Hariti & her consort Panchika to the right.

The notable feature of Cave 2 is the heavy-limbed, but swaying Avalokitesvara, with a flywhisk, who flanks the Buddha image. This feature was to develop later, far away at Elephanta. The wall showing the Thousand Buddha's is a large painting, which overwhelms one with its detailed multiplication. This panel shows graceful cylindrical figures of the end of the 4th century AD going towards the shrine.

Timings: 9 AM to 5 PM, Closed on Mondays