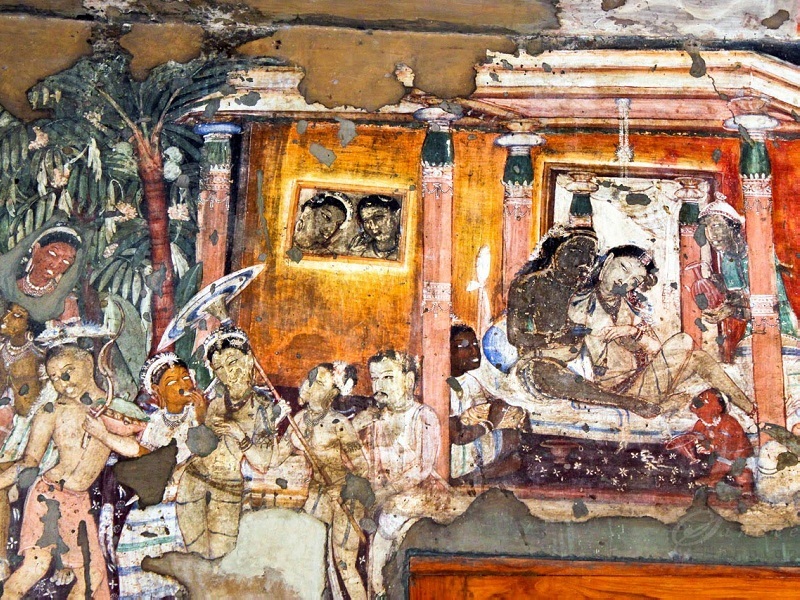 #5 of 14 Places to Visit in Ajanta Caves

At a distance of 700 m from Ajanta Foot Cave Bus Stop, Cave 17 is one of the popular caves in Ajanta and is situated just beside the famous Cave 16.

Cave 17 is a Mahayana monastery covered with many well-preserved wall paintings. A Brahmi inscription found here records the excavation of this cave by a feudatory prince under Vakataka king Harishena. This monastery consists of a spacious hall surrounded by 17 cells on three sides, a vestibule and a sanctum containing the image of Buddha. The porch doorway of cave 17 is similar to that of cave 16, with which it is contemporary. The panel above the doorway depicting the seven Manushi Buddhas (Buddhas in human form) together with the Maitreya or future Buddha seated under their respective Bodhi trees.

The plan of this cave is simple and severe. The pillars in both the porch and interior are arranged in a strict order. The pillars near the shrine have intricate carvings. The Buddha in the shrine is seated in Dharmachakra mudra, or teaching gesture. There are bodhisattva attendants holding flywhisks. The circumambulatory passage around the image shows it is a relatively early cave. The pilasters at the right hand of the porch of this cave are fairly simple. This cave was in transition from Hinayana to Mahayana. So some survivals of symptoms of floral and geometric paintings can be seen on pilasters.

The cave houses some of the notable paintings of the Vakataka age that includes Vessantara Jataka, a huge and gigantic wheel representing the 'Wheel of Life'; flying apsara, subjugation of Nalagiri (a wild elephant) by Buddha at Rajagriha, Buddha preaching to a congregation. The Jatakas depicted here are Chhaddanta, Mahakapi (in two versions), Hasti, Hamsa, Vessantara, Maha-Sutasoma, Sarabha-miga, Machchha, Mati-posaka, Sama, Mahisa, Valahass, Sibi, Ruru and Nigrodhamiga.

This cave also has a panel that tells of Prince Simhala's expedition to Sri Lanka. This includes details to a shipwreck and escaping from ogresses by a flying horse. Another one shows the king of gods flying amidst clouds with his entourage of celestial nymphs (apsaras) and musicians. Other notable paintings include a princess applying makeup and a prince seducing a lover with wine.

Cave 18 is merely a rectangular excavation leading into another cell. The hall has two pillars with moulded bases and octagonal shafts. The most exquisite painting in this cave is a Princess looking at her mirror, after she has done her sringar. One of her female attendants holds a tray of toilet utensils. The other holds a flywhisk in her hand. A little child is looking on from below.