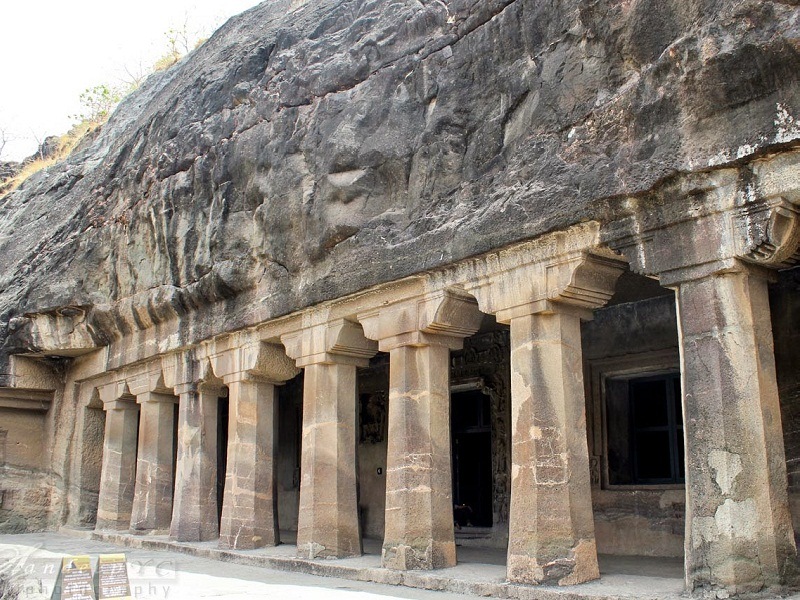 #8 of 14 Places to Visit in Ajanta Caves

At a distance of 450 m from Ajanta Foot Cave Bus Stop, Cave 5 to 8 are situated beside Cave 4 at Ajanta in Aurangabad district of Maharashtra.

Cave 5 is an unfinished vihara in Ajanta group of Caves. The richly-carved doorway and the female figures standing on makaras are the main attractions of this cave. The design of frescoes are intricately done and portrays are some of the best designs in Ajanta.

Cave 6 is a double storeyed vihara consisting of a hall, sanctum sanctorum and a pillared hall in the lower storey and a hall with cells, subsidiary cells and sanctum sanctorum in the upper storey. Buddha in preaching attitude is housed in both the shrines. The depiction of Miracle of Sravasti and Temptation of Mara are the important paintings in the lower storey. The upper floor of Cave 6 has many private votive sculptures, and an unfinished Buddha Shrine. Besides the main shrine, there are two more chapels containing images of Buddha. The cave has a profusion of carved figures of Buddha in different attitudes on the walls of the hall, antechamber and shrine. One small standing figure on the left wall of the antechamber is so finely covered with a lime-coat that it gives the appearance of marble. On the same wall near the feet of a relief of Buddha is the masterly drawing of a remarkable kneeling figure holding three lotus-buds and a handled cylindrical object with a lid.

Cave 7 is intended as an enormous vihara but not completed. Only very elaborate porch with few more details has been built. This monastery consists of a sanctum sanctorum, an oblong open hall with two small porticos supported by heavy octagonal pillars and eight cells. Buddha in preaching attitude is housed inside the sanctum. Other sculptural panels include Miracle of Sravasti, seated Buddha under the protection of Nagamuchalinda, etc.

Cave 8 is an unfinished monastery at Ajanta, located at the lowest level and perhaps earliest among the monasteries. Major portion of the frontage has been swept away by a landslide. There are some remnants of the cave that still remains and it testimony of the beautiful architecture of the place.