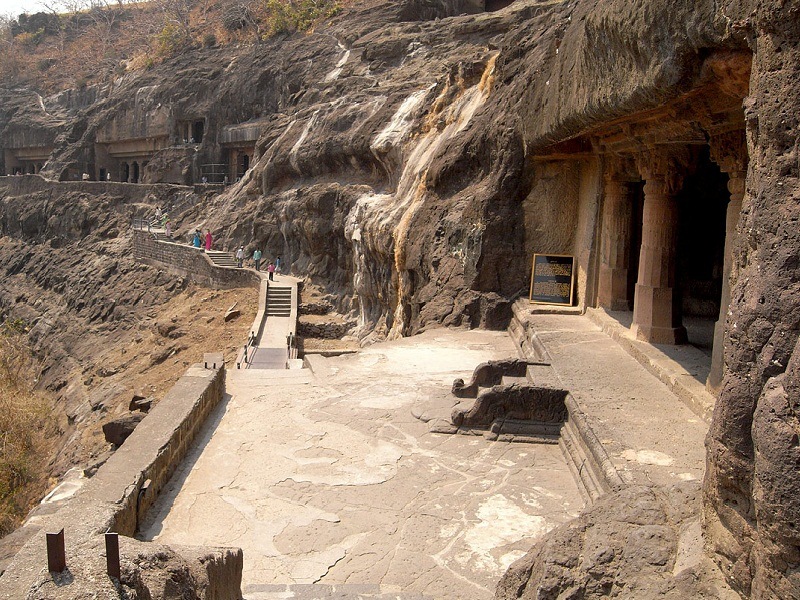 At a distance of 750 m from Ajanta Foot Cave Bus Stop, Cave 20 is situated just beside the Cave 19. Caves 20 to Cave 15 are unfinished viharas and less popular than other caves at Ajanta.

Cave 20 is a pillar less vihara consists of hall, cells, sanctum sanctorum and a pillared verandah datable between 450 AD and 525 AD. A Brahmi inscription in the verandah records the gift of the mandapa by one Upendra. Buddha in preaching attitude is housed in the sanctum. The sculpture of seven Buddhas accompanied by attendants is another important sculptural panel in this cave.

Cave 21 is also a vihara and is the first cave behind periodic waterfall. This cave consists of a hall with 12 pillars, 12 cells, a sanctum sanctorum, and a pillared verandah. Out of 12 cells four are with pillared porches. The sanctum houses a seated Buddha in preaching attitude. The pillars are well carved and the remains of plaster show that there were paintings on the ceiling.

Cave 22 is a small vihara with a narrow verandah and four unfinished cells that is excavated at a higher level and is approached by a flight of steps. Buddha seated in pralamba-padasana is carved on the back wall of the shrine. The sculptural depiction of Buddha in different forms, painted figures of Manushi-Buddhas with Maitreya can be noticed here.

Cave 23 is an unfinished monastery and consists of an astylar hall, sanctum sanctorum, antechamber, side cells and a pillared verandah. The pillars of the verandah are all intact and, along with the pillars of the hall and porches, display fine workmanship in ornamental details. A similar skill is shown in the decoration of the finished pilasters, of which the front one on the right wall of the hall, with a figure breaking open the jaws of a makara within the medallion, is particularly striking. The naga doorkeepers of the door-jambs are noteworthy. Traces of plaster can be seen on the ceiling of the verandah.

Cave 24 is an incomplete vihara and second largest excavation at Ajanta after Cave 4. The plan consists of a hall with pillared verandah and sanctum sanctorum. The lintel of the door has a beautiful frieze of flying figures, the two central ones holding a crown. On the left wall outside the verandah was hewn out a chapel with a pillared porch. The back wall of the chapel has the figure of Lord Buddha seated in the pralamba-padasana attitude with attendants and flying figures. This monastery is most probably one of the latest to be excavated at Ajanta Caves.

Cave 25 is a monastery or vihara consists of an astylar hall, pillared verandah and an enclosed courtyard and excavated at a higher level. Two cells are noted on the left end of the verandah and the hall has no cells. The hall is devoid of shrine.