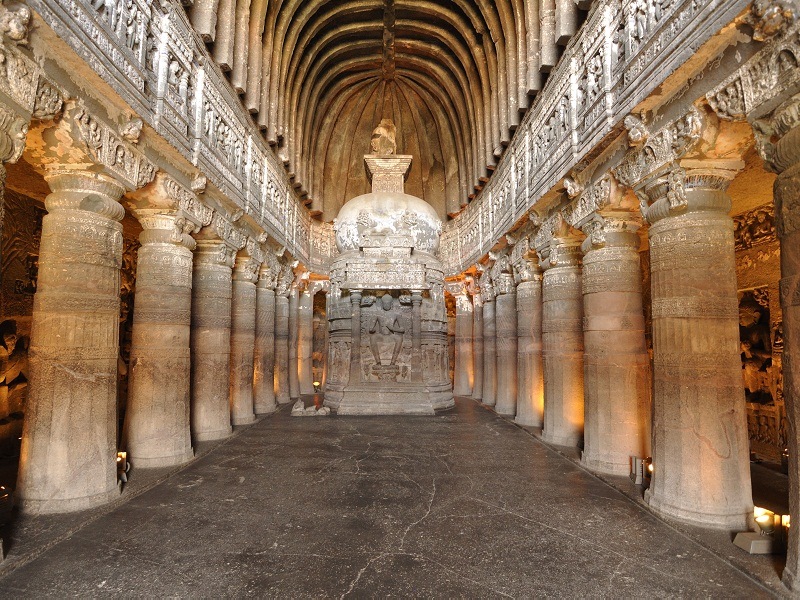 #7 of 14 Places to Visit in Ajanta Caves

At a distance of 750 m from Ajanta Foot Cave Bus Stop, Cave 26 is a chaityagriha situated beside the Cave 25. This cave belongs to Mahayana school of Buddhism and is one of the most popular caves to be visited in Ajanta.

Cave 26 is quite similar to Cave 19, but of a larger dimension and with more elaborately and exquisitely carved sculpted figures. An inscription (AD 450 - 525) found on the wall of the front verandah records the gift of this chaityagriha by a monk Buddhabhadra, a friend of Bhavviraja, a minister of the king of Asmaka (Vidarbha).

The chaityagriha consists of a hall, side aisles (pradakshina) and a rock-cut stupa with an image of Buddha. The facade, inner pillars, triforium (between pillars and roof), and side walls are extensively carved with images and decorative designs. The cave contains a stupa with an image of Buddha seated on a lion throne. He is flanked by riders and flying attendants.

However, the most striking and prominent image of this cave is a large carved statue of the reclining Buddha, representing his moment of death. Below him, his followers mourn his passing; above, celestial beings rejoice.

There is also a carving of Lord Buddha seated in the bhumisparsas mudra under the Bodhi tree at the center. On the left is Mara on an elephant accompanied by his host of demon-forces attacking Buddha and on the right is the retreat of Mara. In the foreground are the daughters of Mara trying to tempt Buddha by dance and music; and in the bottom right corner is the figure of the dejected Mara.