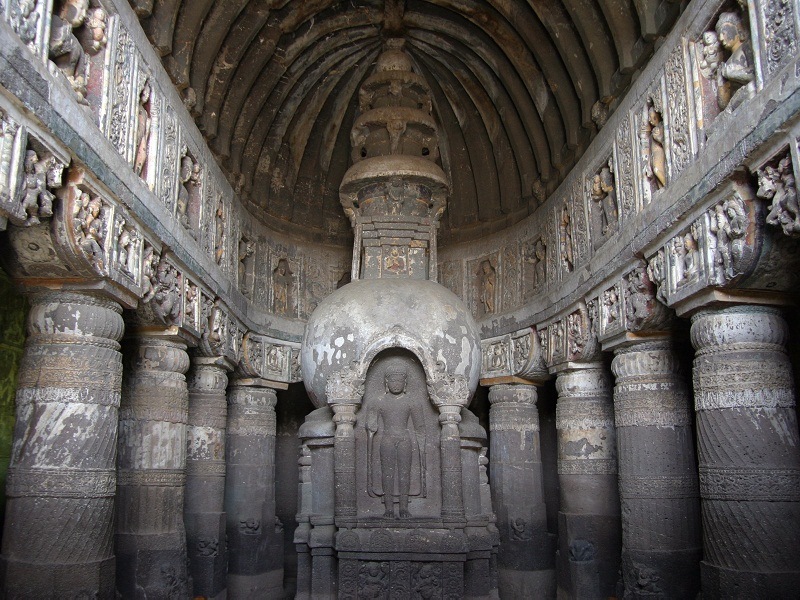 #6 of 14 Places to Visit in Ajanta Caves

At a distance of 710 m from Ajanta Foot Cave Bus Stop, Cave 19 is one of the popular caves in Ajanta and is situated just beside the Cave 18.

Cave 19 is a chaityagriha datable to 5th century AD and could be the gandhakuti. The same donor as cave 17, a feudatory prince under Vakataka king Harishena, patronized this cave. This is a small cave but singularly well-proportioned chaityagriha and is one of the most perfect specimens of Buddhist rock-cut architecture at Ajanta.

Though separated in date from the earlier chaityagrihas by several centuries, it traditionally maintains the older plan with the only innovations that the image of Buddha is now introduced on the votive stupa. The imitation of wooden beams still persists in the stone ribs of the vaulted ceiling. Of the seventeen interior pillars, thirteen resemble those of Ajanta Cave 1, both in workmanship and design, their capitals having the seated figures of Buddha at the center and the projecting brackets being occupied by elephants, flying couples, hermits and musicians. The capitals of the remaining four pillars in the front row resemble those of the pillars of the verandah of Ajanta Cave 2, and the two front pillars are further distinguished by the bracket-figures of sala-bhanjikas.

This cave is known for its sculptural grandeur of the facade. The facade is elaborate, with pilasters, which were to be copied in other caves later. There are heavy bodied and strong yaksha guardians flanking the right and the left side of the main arch. The hall has painted depictions of Buddha in various postures. There is a standing Buddha on the tall stupa. The stupa itself is crowned with an umbrella that nearly touches the roof.