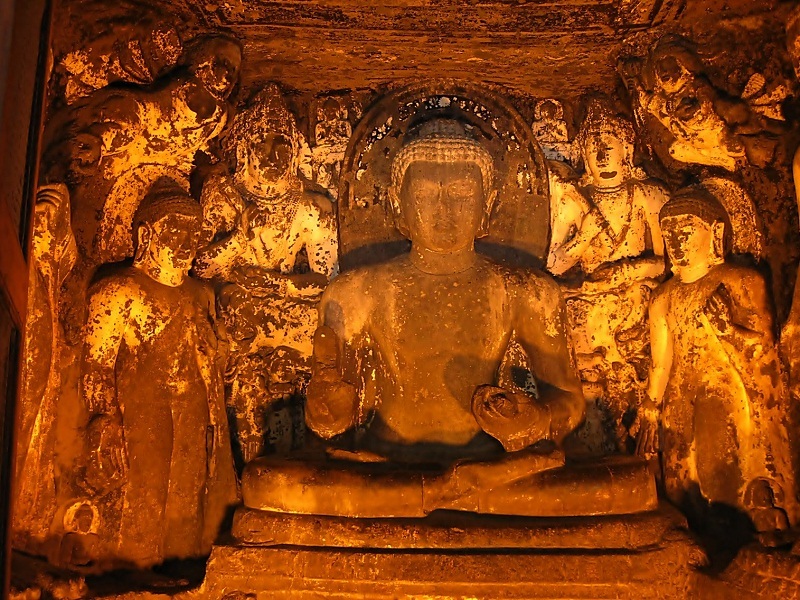 #3 of 14 Places to Visit in Ajanta Caves

At a distance of 450 m from Ajanta Foot Cave Bus Stop, Cave 4 is situated near Cave 2. This is one of the popular and most visited caves in Ajanta.

Cave 4 is the largest vihara planned on a grandiose scale but was never finished. An inscription on the pedestal of the Buddha's image inside the shrine mentions that it was a gift from a person named Mathura. This cave consists of a hall, sanctum sanctorum, pillared verandah and is datable to first half of the 6th century AD. The verandah which is supported by eight octagonal pillars with bracket-capitals has a cell at either end. The rear wall of the verandah contains the panel of Litany of Avalokitesvara.

The hall has 28 pillars arranged in a square, which are similar to those in the verandah. On the three sides of the hall are hewn a number of cells, many of which can be seen at different stages of excavation. The hall has one main entrance and two side-doors with wide windows in between. Flying figures, guardians, images of Ganas and Buddha, maidens clutching trees and dwarfs with garlands adorn the central doorway. One can also find images of a man resisting temptation from a woman and a man and woman running away from a mad elephant.

The sanctuary houses a colossal image of the Buddha in preaching pose flanked by bodhisattvas and celestial nymphs hovering above. In front of the Buddha image is a congregation of devotees, including monks. The door-jambs and lintel are decorated with figures of Buddha. The walls of the antechamber are adorned with paintings of six huge standing Buddha, two of them unfinished, with the right hands in the abhaya-mudra and the left holding the hem of the garment. The cave was once painted, traces of which can be noticed. The ceiling of the hall preserves a unique geological feature of a lava flow.

Cave 3, adjacent to Cave 4, is an incomplete monastery and only the preliminary excavation of pillared verandah exist.