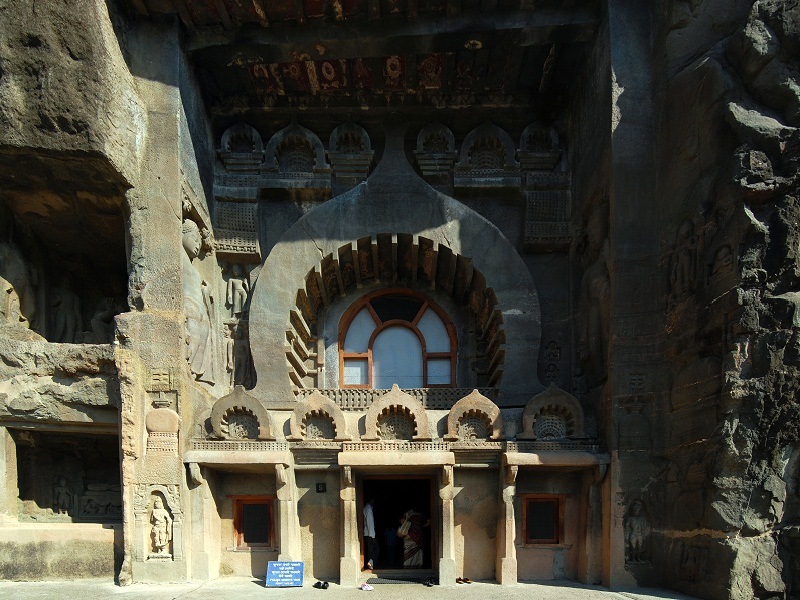 #9 of 14 Places to Visit in Ajanta Caves

At a distance of 550 m from Ajanta Foot Cave Bus Stop, Cave 9 to Cave 11 are situated beside Cave 8 at Ajanta in Aurangabad district of Maharashtra.

Cave 9 is an apsidal chaityagriha datable to 2nd century BC and belongs to the Hinayana phase of Buddhism. The chaityagriha consists of an entrance door, two side windows, central hall, nave flanked by side aisles (pradakshina) on either side separated by a row of 23 pillars and a stupa, the object of worship.

The chaityagriha exhibits reproduction of wooden architectural styles, in the form of inward tapering octagonal pillars, evidence of fixing wooden beams & rafters, etc. The chaitya was in use during later period also as indicated by the sculptures of Buddha on the facade and side walls facing the court. The cave consists of two layers of paintings, the earlier dating back to the second half of 1st century BC and the later to 5th - 6th centuries AD.

Cave 10 is also a chaityagriha datable to 2nd century BC and belongs to Hinayana school. This cave is the earliest chaityagriha and most probably the earliest excavation at Ajanta. This is the cave which was discovered by Captain Smith in 1819 and it bears his inscription in pencil.

The cave consists of a large central hall, nave flanked by two aisles (pradakshina) separated by a row of 39 octagonal pillars and a rock stupa at the apsidal end, the object of worship. The cave consists of two periods of paintings, the earlier dated to 2nd century BC and the later 4th - 6th century AD. Two Jataka stories of this period have been identified, namely, the Sama (Shama) Jataka and the Chhaddanta Jataka. The later period paintings contain Buddha figures in various poses mainly over the pillars.
Cave 11 is a vihara datable to beginning of 5th century AD. It consists of a hall with six cells and a long bench, a pillared verandah with four cells, a sanctum sanctorum. The Buddha in preaching attitude in this cave is one of the earliest images at Ajanta. The important fact about this Buddha is that it is attached to a stupa. This means a compromise between stupa worship and image worship. This cave is interesting, because it shows the transition from the earlier Hinayana to the later Mahayana Buddhist phase of worship. The round stupa has the images of the Buddha to its bare girth.