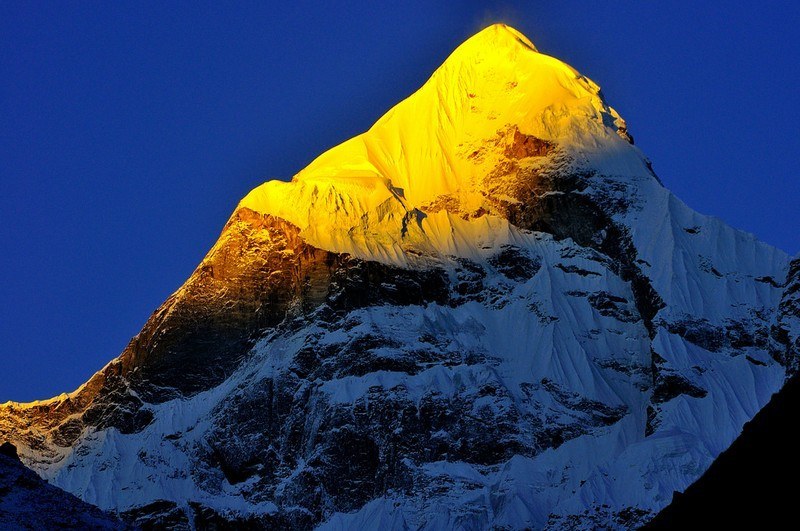 At a distance of 9 km from Badrinath, Nilkantha is a snowy peak in the shape of a pyramid near Badrinath in Chamoli district of Uttarakhand. The peak is situated at an elevation of 6,597 m above sea level. It is one of the best trekking trails in Uttarakhand.

Neelkantha, which is also known as the Garhwal Queen, is named after Lord Shiva. From a distance the peak resembles Lord Shiva sitting in meditation. It receives the first ray of Sun which glimmers the valley. Nilkantha is a major peak of the Garhwal Himalayas in the Uttarakhand region. Although substantially lower than the highest peaks of the region, it towers dramatically over the valley of the Alaknanda River and rises 3,474 m above Badrinath. Frank Smythe described the peak as second only to Siniolchu in Himalayan Beauty.

The Satopanth Glacier is on the northwest side of Nilkantha, the Panpatia Glacier remains on the southwest side and feeds Khirao Ganga, a small stream that runs under the south side of the peak. Few successful ascents have been reported on Mt. Neelkanth, the first climb from its western ridge was attempted in 1993 by two British Climbers.

The best time to visit Neelkanth Peak is from June to September. The 10 km long Nilkantha trek starts from Badrinath. Trek from Badrinath to Charan Paduka (3 km) is picturesque and visitors can visit the foot prints of Lord Vishnu along with Rishi Ganga Falls here. The 6 km trek from Charan Paduka to Neelkanth Base Camp is little tough. From the base camp one can get the close view of Mount Nilkanth. Mountaineers can stay at base camp and attempt to climb the summit. This trek is usually done as a 2 day trip from Badrinath.