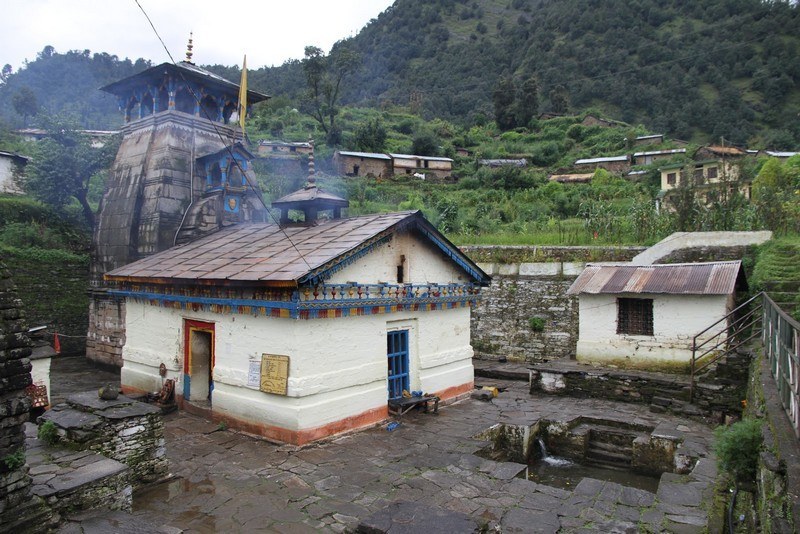 At a distance of 27 km from Kedarnath, 13 km from Gaurikund and 10 km from Sonprayag, Triyugi Narayan Temple is an ancient Hindu temple situated in Triyuginarayan village in Rudraprayag District of Uttarakhand. It lies at an altitude of 1980 m.

Triyugi Narayan Temple is dedicated to Lord Vishnu. The present temple, believed to have been built by Adi Shankaracharya. This temple offers panoramic views of snowcapped mountains with beauty of Garhwal hill region. The word Triyuginarayan is formed of three words tri means three, yugi denotes Yuga and Narayan is another name of Vishnu.

This place is associated with marriage of Lord Shiva and goddess Parvati. According to mythology, Triyuginarayan is the capital of Himavat. It was the venue of the celestial marriage of Shiva and Parvati. Lord Vishnu as Parvati's brother did kanyadaan and Lord Brahma was the priest of the wedding. Brahma Shila in front of the temple also marks the exact place of the wedding.

The architect of this temple resembles Kedarnath Temple. The sanctum houses a 2 feet silver idol of Lord Vishnu accompanied by goddess Lakshmi. There are idols of Badrinarayan, Sita Ramachandra, and Kubera. There is an akhanda jyothi burning inside the sanctum. In front of it there is an idol of Shiva and Parvati blessing devotees in newly wed form. Just outside, there is a saligrama shila of Lord Vishnu in sleeping posture with goddess Lakshmi and Ganesha.

A special feature of this temple is the fire that flames in front of the temple which is believed to have been burning from the times of the divine marriage. Thus the temple is also known as Akhand Dhuni temple. Pilgrims offer wood to the fire in the havana-kund and collect the ashes as blessings. Apart from this, pilgrims can also visit three kunds namely Rudrakund, Vishnukund and Brahmakund. The main Saraswati Kund is the source of these three kunds and it is believed that the water in this kund springs from the navel of Lord Vishnu. Moreover, the kund is known for curing the infertility of women.

Just outside the temple one can find a small temple dedicated to Panchanama devatas: Goddess Annapurneshvari, Lord Ishaneshwar, Lord Hanuman, Lord Shiva and on the dwara there is Lord Ganesha's idol. There is also a cave dedicated to Gauri at a distance of 2 km from Triyugi Narayan Temple. The annual mela is held on the Shukla Paksha Dwadasi, 12th day in the Hindu month of Bhadrapad (Aug/Sep).

Apart from the 10 km paved road from Sonprayag, Triyugi is also accessible from the main road by a 7 km trek from Sitapur village.