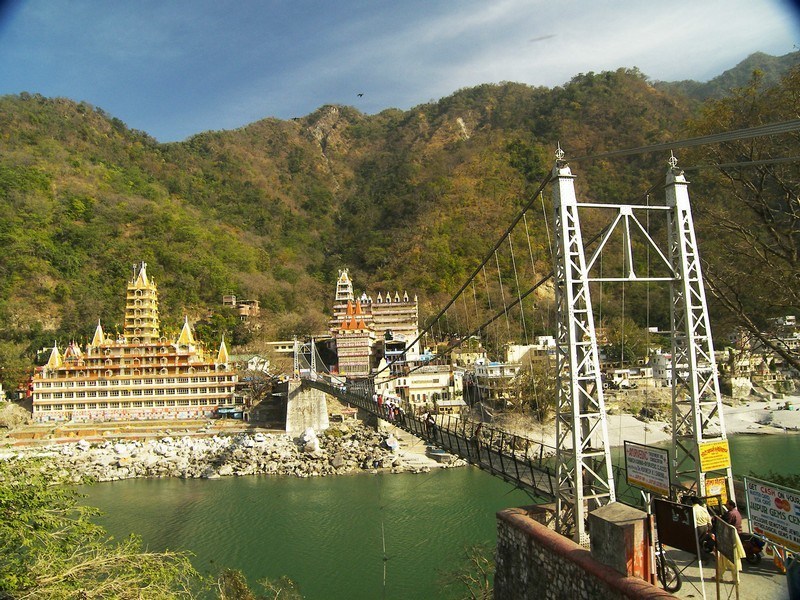 #2 of 29 Places to Visit in Rishikesh

At a distance of 6 km from Rishikesh Railway Station and 3 km Swarg Ashram, Lakshman Jhula is an iron suspension bridge situated in Rishikesh. It was erected over the Ganges River and is a landmark of Rishikesh.

Lakshman Jhula is originally a jute rope bridge. According to legend, Lord Rama's younger brother, Laxmana crossed the river Ganges at this point using Jute Rope Bridge. The bridge was washed away in the 1924 floods and it was replaced by the present iron bridge in 1939. It is 450 feet long and is situated at a height of 70 feet from the river. The bridge connects Pauri district with Tehri district. Another similar suspension bridge Ram Jhula was built in 1986 at nearby Sivananda Nagar.

This jhula provides a beautiful view of famous temples, ashrams and River Ganga. The jhula has now become one of the most visited tourist spots of Rishikesh, not simply because of its ancient origin and religious sanctity, but also because of the grand temples situated around this area. A thirteen storey temple, called Terah Manzil, near the Lakshman Jhula is very popular amongst visitors. Another temple around the bridge is the Lakshman temple, with Rishi Kund. The market around Lakshman Jhula is famous for wooden goods, Rudraksha, Idols, Holy books, Gems, local jewelry, clothes and street food.