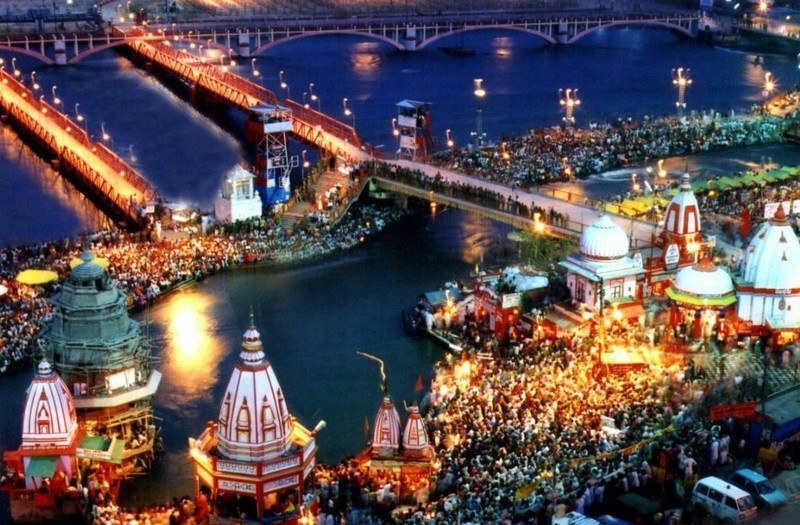 Peak Season: November & May to June

At a distance of 26 km from Rishikesh, 54 km from Dehradun, 86 km from Mussoorie, 192 km from Chandigarh and 208 km from Delhi, Haridwar or Hardwar is an ancient religious city in the Haridwar district of Uttarakhand. Haridwar is one of the best tourist Places to visit in Uttarakhand apart from being a popular pilgrimage site in India and also one of the well known tourist places near Delhi. Haridwar is another popular attraction not to miss in a Uttarakhand tour package.

Haridwar, literally translated as Gateway to God, is one of the seven holiest places for Hindus, located on the banks of River Ganges. It is the place where river Ganga descends to the plains. Haridwar is situated at an altitude of 314 m. It serves as a gateway to the Char Dham destinations of Uttarakhand which are Badrinath, Kedarnath, Gangotri and Yamunotri.

The history of Haridwar dates back to the period of King Vikramaditya, around 2nd century BC. Haridwar is referred to as Mayapuri, Gangadwar, and Mokshadwar in the ancient Hindu texts and epics. The holy city of Haridwar is considered as old as Varanasi and according to legend; gods left their footprints in Haridwar. According to the Samudra manthan, Haridwar along with Ujjain, Nashik and Prayag (Allahabad) is one of the four sites where drops of Amrit (nectar) fell while it was being carried by Garuda.

Har-ki-Pauri is the most important place of Haridwar where thousands of people take a dip in the holy waters of the Ganges. It is believed that Prince Bhagirath served self-punishment here to rescue the souls of his ancestors who had died due to the curse of Kapil Muni. His prayers were answered and Ganga started flowing from the locks of Lord Shiva and reviving the sons of King Sagara.

Haridwar is one of the venues for famous Kumbh Mela which takes place once in every 12 years. Maha Kumbh Mela will be held in Haridwar in 2022. The Ardh Mela is held every six years. Baisakhi, Kanwar Mela, Somwati Amavasya and Kartik Purnima are the other important festivals celebrated in Haridwar.

Jolly Grant Airport at Dehradun is the nearest airport, which is about 38 km from Haridwar. Haridwar Railway Station is well connected by train with Delhi, Dehradun, Rishikesh, Puri, Indore, Trivandrum, Ujjain, Madurai, Okha, Saharanpur, Mumbai, Allahabad, Gorakhpur, Varanasi, Amritsar, Howrah and Kathgodam. Haridwar can also be reached by State run buses that connect to nearby cities as well as New Delhi.

The best time to visit Haridwar is from October to April.

How to Reach Haridwar - Full Details

Top 10 Places to Visit in Haridwar

At a distance of 2 km from Haridwar Junction Railway Station, Har Ki Pauri is a famous ghat on the banks of the River Ganges in Haridwar. This revered place is the major landmark of the holy city of Haridwar.

Har Ki Pauri was constructed by King Vikramaditya in memory of his brother, Brithari in 1st century BC. It is said that Brithari used to mediate on the banks of River Ganges. Har Ki Pauri, one of the most famous places in Haridwar, is believed to be the precise spot where the Ganges leaves the mountains and enters the plains.

Lord Shiva and Lord Vishnu are believed to have visited the Brahmakund in Har Ki Pauri in the Vedic times. It is also said that Lord Brahma, who is the Hindu God of Creation, performed a yagna at this place. There is a large footprint said to belong to Lord Vishnu on a stone wall. An area within Har Ki Pauri, where the evening Ganga Aarti takes places is considered most sacred and is known as Brahmakund. .....

At a distance of 5 km from Haridwar Junction Railway Station, Chandi Devi Temple is one of the famous temples situated atop the Neel Parvat on the Eastern summit of the Shivalik Hills in Haridwar at an altitude of 2,900 m.

This temple is dedicated to Goddess Chandi Devi, an incarnation of Goddess Parvati. This is one of the most famous temples of India. This Temple is highly revered by devotees as a Siddh Peetha which is a place of worship where desires get fulfilled. It is one of three such Peethas located in Haridwar, the other two being Mansa Devi Temple and Maya Devi Temple.

Chandi Devi Temple was built in 1929 by Suchat Singh in his reign as the King of Kashmir. However, the main idol of Chandi Devi at the temple is said to have been installed in the 8th century by Adi Shankaracharya. The temple, also known as Neel Parvat Teerth, is one of the Panch Tirth located within Haridwar.

According to legend, the kingdom .....

At a distance of 3 km from Haridwar Junction Railway Station, Mansa Devi Temple is a Hindu temple located atop the Bilwa Parvat on the Shivalik Hills in Haridwar. The temple also known as Bilwa Tirth is one of the Panch Tirthas (Five Pilgrimages) within Haridwar.

The temple is dedicated to Goddess Mansa Devi, a form of Shakti and is said to have emerged from the mind of the Sage Kashyap. Mansa is regarded as the sister of the Naga (serpent) Vasuki. This Temple is highly revered by devotees as a Siddh Peetha which is a place of worship where desires get fulfilled. It is one of three such Peethas located in Haridwar, the other two being Chandi Devi Temple and Maya Devi Temple. The inner shrine has two deities installed, one with eight arms and the other one three headed with five arms.

The term Mansa means wish and it is believed that the goddess fulfills all the wishes of sincere devotees who tie threads to the branches of .....

The Temple is dedicated to Mata Vaishno Devi, and is modeled after the famous Vaishno Devi Temple in Jammu & Kashmir. This temple is relatively new but it has been attracting large number of tourists. This temple is becoming a major tourist attraction in Haridwar.

The main deities in the temple are Goddess Lakshmi, Goddess Kali and Goddess Saraswati. It is believed that all three Goddesses together became Vaishno Devi in order to kill the demon Mahishasura. It is believed that the Goddess blesses only those who truly intend to seek her blessings from the bottom of their hearts.

At a distance of 3.5 km from Haridwar Junction Railway Station, Daksheswara Mahadev Temple or Daksha Mahadev temple is located in Kankhal in Haridwar.

This temple is named after King Daksha Prajapati, the father of Sati. Daksha is one of the fourteen Prajapatis, creator deities, who preside over procreation and are the protectors of life in Hindu mythology. Popularly known as Sri Daksheshwar Temple, this temple was initially constructed in 1810 AD by Queen Dhankaur. However, the temple was again rebuilt in 1962.

According to the legend, Daksha Prajapati performed a holy ritual, known as Daksha Yagna at this place. However, he did not invite Lord Shiva, who was his son-in-law, for this Yagna. However, Sati, the daughter of Daksha attended the yagna. Daksha insulted Lord Shiva in the Yagna. Feeling insulted by her father's behavior, Sati sacrificed her life in the fire of the Yagna. The Daksha Mahadev Temple is believed to .....

At a distance of 8 km from Haridwar, 21 km from Rishikesh & 55 km from Dehradun, Rajaji National Park is a Tiger Reserve situated at the edge of the sprawling Dehradun Valley. The park is spread over an area of 820.42 sq. km. in Dehradun, Haridwar & Pauri Garhwal districts of Uttarakhand. It is one of the must visit national parks in India.

At a distance of 26 km from Haridwar, 42 km from Dehradun, 74 km from Mussoorie, 201 km from Chandigarh and 233 km from Delhi, Rishikesh is a holy city on the banks of the River Ganges and is located in the foothills of the Himalayas. It is one of the top pilgrimage sites in India and among the best places to visit near Delhi. It is also a popular 2 day trip from Delhi and is also base for several trekking trails in Uttarakhand state.

Rishikesh is the gateway to the upper Garhwal region and the starting point for the Char Dham pilgrimage (Gangotri, Yamunotri, Badrinath and Kedarnath). Rishikesh is situated at an elevation of 356 m above sea level and consists of three distinct areas known as Rishikesh, Swargashram and Muni .....

At a distance of 29 km from Mussoorie, 30 km from Chamba, 60 km from Dehradun, 89 km from Rishikesh, 112 km from Haridwar, 141 km from Srinagar, 224 km from Chandigarh, 258 km from Patiala, 283 km from Shimla, and 309 km from Delhi, Dhanaulti is a picturesque hill station situated in the Tehri Garhwal district of Uttarakhand. Lies on Mussoorie - Chamba Road, it is one of the popular weekend getaways from Delhi and among the best offbeat destinations to visit in Uttarakhand.

Situated at an altitude of 2286 m, Dhanaulti is known for its quiet environment and tranquility. Sitting on the edge of Tehri Garhwal District, Dhanaulti shares its west-side border with Dehradun. The long wooded slopes, relaxed outdoors, cool crossing breeze, warm and hospitable inhabitants, lovely weather, and fabulous view of snow-capped mountains, makes Dhanaulti an enticing hideaway for tourists. It is still untouched and becoming an alternative to the crowded Mussoorie and Dehradun.

At a distance of 600 m from Haridwar Junction Railway Station, Maya Devi Temple is an ancient Hindu temple situated at Birla Ghat in the holy city of Haridwar.

The presiding deity of the temple is Goddess Maya. According to the history, this temple dates back to the 11th century. It is one of the three ancient temples of Haridwar which are still intact, the other two being Narayana-shila and Bhairava Temple. Haridwar was previously known as Mayapuri in reverence to this deity.

Goddess Maya is a three-headed and four-armed deity who is believed to be an incarnation of Shakti. The temple is a Siddh Peetha which is a place of worship where desires get fulfilled. It is one of three such Peethas located in Haridwar, the other two being Chandi Devi Temple and Mansa Devi Temple. The inner shrine consists of idols of goddess Maya in the center, goddess Kali on the left, goddess Kamakhya on the right.

The temple is visited by large number of devotees during the Navratra and .....

At a distance of 6 km from Haridwar Junction Railway Station, Bharat Mata Mandir, also known as Mother India Temple, is situated at Motichur in Haridwar. This temple is one of the most visited temples in Haridwar

Bharat Mata Mandir is a famous multi-storey temple of Mother India built to salute the dedication of all the patriots and freedom fighters. This shrine was founded by Swami Satyamitranand Giri. It was inaugurated by Late Prime Minister, Smt. Indira Gandhi, in the year 1983.

With a height of 180 feet, the temple stands tall with eight stories and each story has different theme dedicated to several legends and deities. In addition, the Bharat Mata Mandir is also dedicated to all the patriotic freedom fighters, who contributed to the freedom of the country. There is a lift facility to reach upper floors of the temple.

On the first floor, Statue of Bharat Mata adorns the hall, where the Goddess is holding a milk pot in one hand and stack of grain in the other hand. .....