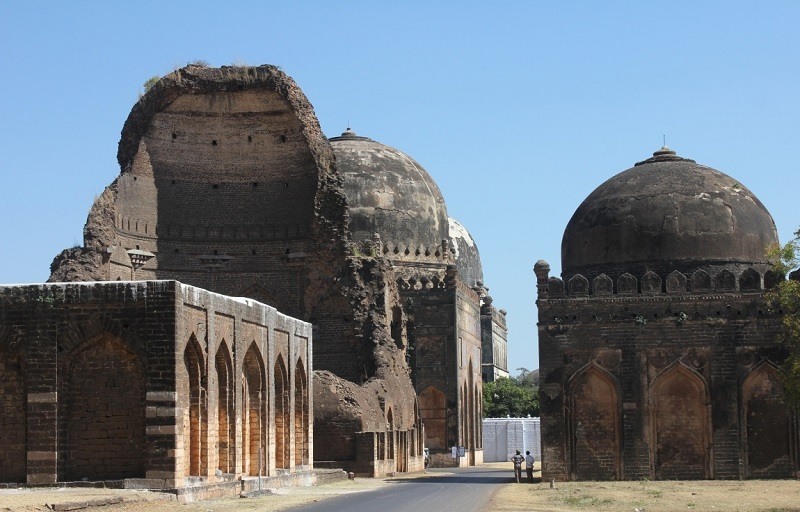 At a distance of 5.5 km from Bidar Railway Station, Bahmani Tombs located at Ashtur are other important historical monuments in Bidar, after the Fort.

The 12 tombs of Bahmani Sultans are located in the same compound. They are huge structures with beautiful arches, niches and lofty domes. Among all the tombs, the tomb of Ahmad Shah Wali is most popular. Ahmad Shah shifted the capital from Gulbrga to Bidar in 1430 and rebuilt the old fort. Ahmed Shah Bahmani was a religious ruler. He was devoted to Khwaja Bande Nawaz of Gulbarga and later to the order of Shah Nimat-Ullah of Kirman. He was also respected the doctrine of Lingayats, a religious order of Deccan established by the philosopher, statesman and social reformer Basavanna.

Ahmad Shah Wali the 9th Bahmani Sultan died in 1436 and his son Alauddin built a majestic tomb for his father. The walls are about twelve feet thick supporting a huge dome on the top. There are three doors built into huge recessed arches. This tomb is known for its beautiful walls, which are inscribed with Quran verses written in gold color. The walls of the tomb are also decorated with beautiful paintings. Highlight of this tomb is the swastika symbol, which has been used in this mausoleum for ornamentation. The paintings here depict lovely contrasts and skill of artist in blending colors. Urus (Jatra) is held here every year in which both Hindus and Muslims participate. East of Ahmad Shah Tomb is the tomb attributed to his wife possibly named Shah Jehan Begum. The tomb is built at a lower level.

Another famous tomb is the tomb of Sultan Allauddin Shah which consists of tiled panels and carvings on the black stone margins of arches which are very impressive. Allauddin was a thoughtful and cultured prince who built his tomb during his lifetime. The arches in tomb are elegantly decorated with stucco work. He died of a wound in 1458. This tomb lies next to Ahmad Shah Tomb.

Humayun Shah tomb, the son of Alauddin, was struck by lightning and most of its dome and two walls collapsed. The shattered tomb is a strange sight. It seems like a cross section cut model of a tomb. South west to Humayun's Tomb is the tomb of his wife Malika-i-Jahan. She played an important role during the reign of her minor sons Nizam Shah and Mohammed Shah. Nizam Shah Tomb was probably built by Malika-i-Jahan and is situated next to Humayun Tomb. The tomb inexplicably remained incomplete and is open with the dome missing. Mohammed Shah III tomb lies next to Nizam Shah tomb. His tomb again is incomplete.

Mohammed Shah IV built his own tomb along with several additions to the Bidar Fort. The tomb is majestic with arches on the walls. Mohammed Shah IV's nominal successors were his sons Ahmad Vira Shah II, Alauddin Shah II and their sons, Wali-Ullah Shah and Kalim-Ullah Shah who were under the control of Barid Shahis. All four tombs are similar with conical domes and are situated to the south and west of the Mohammad Shah IV Tomb.