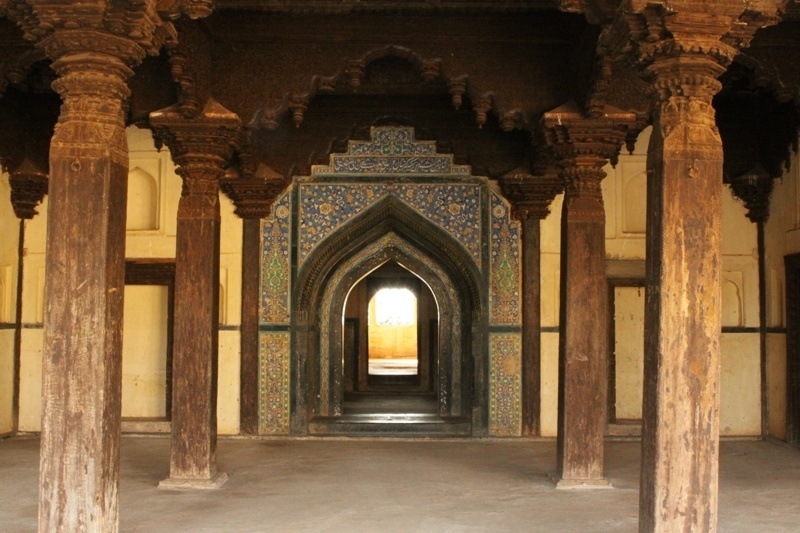 At a distance of 2.5 km from Bidar Railway Station, Rangin Mahal is a beautiful palace situated inside the Bidar Fort.

The Rangin Mahal positioned near the Gumbad Gate, is one of the best preserved sites in Bidar Fort. The mahal is famous for its beautiful wood carvings, fascinating tile mosaics and Mother of Pearl decorations.

Rangin Mahal was constructed during the reign of King Ali Barid Shah of Baridshahi dynasty (1542 - 1580). Ali Barid Shah was a great patron of Persian poetry and art. Rangin Mahal literally means 'Colored Palace' and this name was apparently given to it on account of its walls being originally decorated with tiles of different hues, traces of which still exist.

The design of the Rangin Mahal represents the blend of the both Hindu and Muslim architectures. The palace has two floors consisting of a hall with rooms. The Mahal features five-bay hall that comprises of carved wood columns in rectangular form. The columns have elaborate capitals and intricately carved brackets. Inside the Mahal, there is an entrance to the inner rooms that has a frame of multi-colored tile work. Above the entrance arch, verses from Quran have been inscribed. The inner chambers have more tile work and mother-of-pearl inlay work, mainly around the entrances and on a panel along the base of the walls.

In the basement of the Rangin Mahal there is a series of rooms, which were apparently occupied by guards and the servants of the palace.

Permission is required from ASI office near the fort to visit Rangin Mahal.