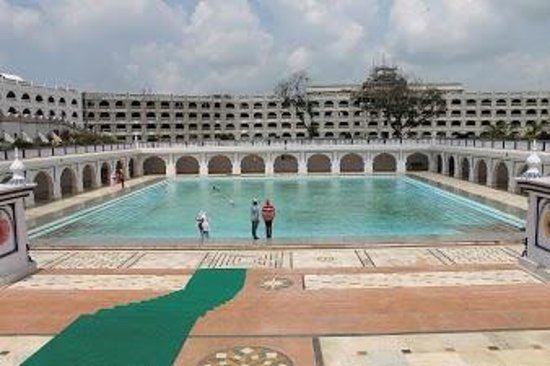 At a distance of 2.5 km from Bidar Railway Station, Gurudwara Nanak Jhira Sahib is a Sikh historical shrine and one of the important pilgrimage sites in Bidar.

Gurudwara Nanak Jhira Sahib was built in the year 1948 and is dedicated to the first Sikh Guru Nanak Dev Ji. The Gurudwara is established in a nice valley, surrounded by laterite hills on three sides. The shrine comprises Darbar Sahib, Diwan Hall and Langar Hall. In the sukhaasan room, Guru Granth Sahib, the holy book of Sikh is placed.

According to the History, Guru Nanak Devji along with his disciple Mardana visited Bidar during his second Udasi around 1512 AD. While he was visiting this place, Guru Nanak sat on the outskirts of the village on the foot of a hill. When people came to know about Guru Sahib, they started gathering here. They told Guru Nanak about the scarcity of water and also that the water available in Bidar was salty and unfit for drinking. It is believed that after hearing the plight of the residents, Guru Nanak touched a stone and rolled it with his foot. To the surprise of the people, a spring of clean water started gushing out. That water source is still preserved here and it still serves the people of Bidar for the last 500 years. A large beautiful Gurudwara is constructed close to the spring, known as Gurudwara Nanak Jhira (Jhira meaning spring of water).

The water from the spring is collected in a small water tank called Amrit Kund, built opposite to Gurudwara. It is believed that a holy dip in the tank is enough to cleanse the body and soul of the devotees. There is a free community kitchen where free food is given to pilgrims. A Sikh museum has been built in the memory of Guru Tegh Bahadur, depicting the important events of Sikh history through pictures and paintings.

Devotees throng to the Nanak Jhira Gurudwara especially during Guru Nanak Jayanti, which is one of the major festivals of the Sikhs. About 4 to 5 lakh pilgrims and tourists visit Gurdwara Nanak Jhira every year. Holi and Dussehra are also celebrated in grand manner.