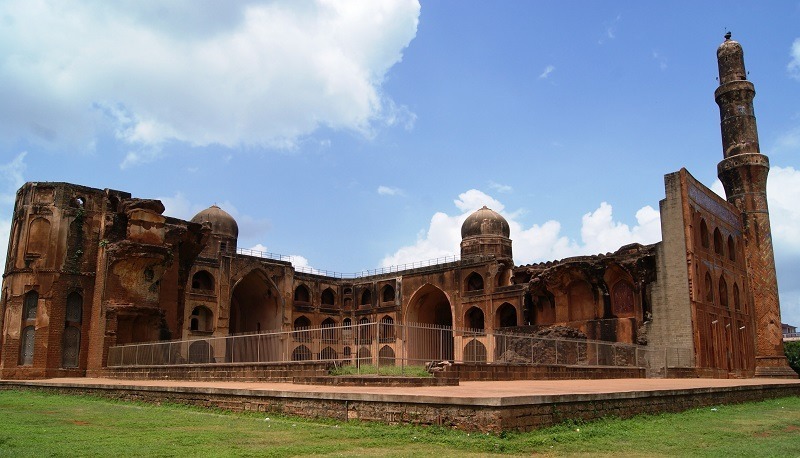 At a distance of 2 km from Bidar Railway Station, Mahmud Gawan Madarsa is one of the major historical structures and a beautiful structure situated between the Fort and Chaubara Clock Tower.

Mahmud Gawan Madarsa is an old Islamic university built by Khwaza Mahmud Gawan in 1472. Mahmud Gawan was a Persian merchant who arrived in the Bahamani Sultanate at around 1453 AD. Due to his honesty, simplicity and knowledge he impressed the Bahamani Kings. He ultimately reached to the post of prime minister and was much respected among the local population.

Gawan had built a large madarsa at the centre of Bidar with his own money. It functioned like a university, in the same way as other contemporary madarsas of West and Central Asia and Saharan Africa. The architectural style of the madarsa strongly resembles the buildings of Samarkand.

The Madarsa had an imposing three-story building with 100 feet tall minarets in four corners. Only the northern end minaret is survived today which shows traces of blue glazed tile work with calligraphy in Thuluth script containing religious texts. The first and second floors having balconies which project from the main structure in a curvilinear form without any bracket support. The lower part of the tower was decorated with tiles arranged in a chevron pattern, the colors being green, yellow and white.

This three-storied building was once surmounted with domes. The walls of the structure are adorned with colorful tile work and are inscribed with verses from the holy Quran. Earlier, this college housed a library, mosque, laboratory, and lecture halls. There were thirty-six rooms for students and six suites for the teaching staff. It housed a library where 3000 Persian books had been kept.

The Madarsa ran effectively for over two centuries, but unfortunately it suffered as Bidar witnessed a series of political struggles after that. After Aurangzeb conquered the city of Bidar, the Madarsa was then used as a military barrack. The building suffered much damage due to explosion of gun powder in 1695, but still retains much of the original architectural features.

The ASI took over this monument in has put in a great deal of effort in conserving it.