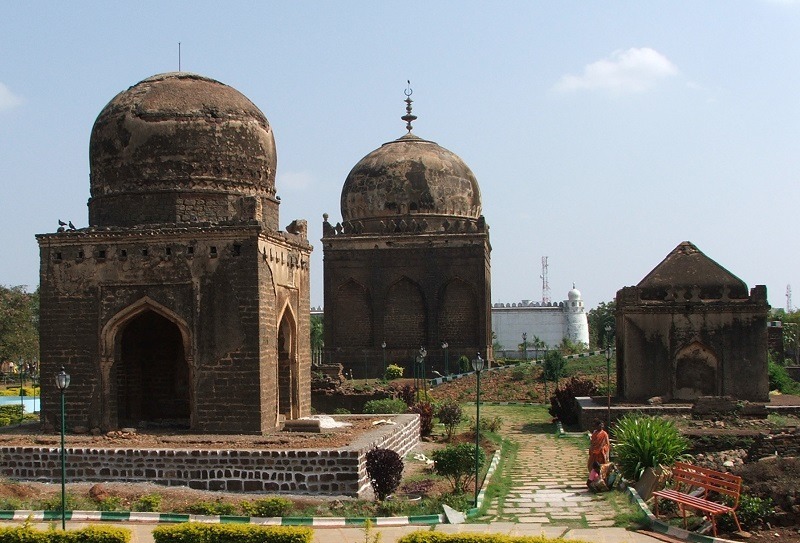 At a distance of 3 km from Bidar Railway Station, the Barid Shahi Tombs are historical monuments situated in Deccan Park and Barid Shahi Park near Bidar Bus Station. The Archaeological Survey of India has declared the group of tombs as national monuments. It is one of the must-include places in Bidar Tour Packages.

The Barid Shahis gained control of the territory around Bidar at the beginning of the 15th century. The tombs of Ali Barid and his son Qasim Barid are located in the sprawling gardens of Deccan Park. The 55-acre garden has hundreds of plants spread across. The main entrance has a gateway on the south, decorated with architectural motifs with star-shaped panels and beautiful patterns. The tombs are among the places to visit in Bidar.

Ali Barid Shah was the most prominent among Baridshahi rulers. He was interested in architecture and built his own tomb three years before his death in 1577. The Tomb of Ali Barid Shah is one of the finest examples of Islamic architecture and beauty. There is a two-storied gateway that leads to this tomb. The 70 feet high tomb has a big dome supported by four pillars. It has a grand pavilion based on a high platform built by green granite and laterite rock. It has rich floral designs carved on stone. It also has painted tiles inside of the dome. The paintings have hand designs along with calligraphic patterns. The structure has the tombs of Ali Barid and his wives. A small mosque is also built near the tomb which has rich decoration walls.

The tomb of Ibrahim Barid Shah is situated right in front of Ali Barid's tomb. This tomb is almost similar to the one of Ali Barid but smaller in size. Some of the flower designs are very intact and beautiful. It was built on a high platform with many graves spread all around. These are sixty-seven graves that belonged to the royal line of Ali Barid Shah.

Barid Shahi Park is located on the other side of the road opposite Deccan Park. The park is well maintained with walkways and lush greenery. Just beyond the Park gateway is Qasim Barid Shah II Tomb. This tomb has a similar size and architecture to Ali Barid Shah's tomb. The square tomb has walls with three arches each and the entrance on the southern wall.

To the West of Qasim Barid II tomb, there is a tomb of Qasim Brid but smaller in size. He was the founder of Barid Shahi Kingdom. There are several other smaller tombs with no details. The tombs are believed to belong to the clan of Qasim Barid Shah II. One notable tomb in the cluster is the one that belongs to Chand Sultana.