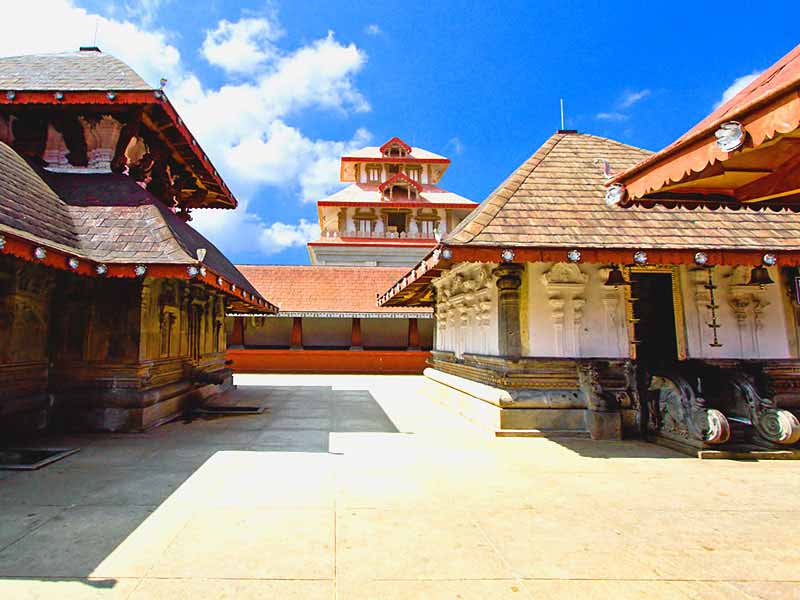 Place Location: On The Way To Talacauvery

Travel Tips: Bhagamandala is on the way to TalaCauvery (8 Kms) from Madekeri and can be visited together.

At a distance of 9 km from Talacauvery and 36 km from Madikeri, Bhagamandala is a sacred place situated in the Coorg district of Karnataka. Also known as Bhagundeshwara Kshetra, it is one of the famous pilgrimage sites in Karnataka and also one of the top places to experince Coorg Tourism.

Bhagamandala is situated at the confluence of two rivers, the Cauvery and the Kannike. A third river, the Sujyothi is said to join from underground. It is well known as Triveni Sangama and also considered as Dakshina Kashi. It is a common practice for pilgrims to take a dip in the sangama and perform rituals to their ancestors before proceeding to Talacauvery, the birthplace of Kaveri River. During 1785-1790, the area was occupied by Tipu Sultan and he renamed it Afesalabad. Then in 1790 King Dodda Veerarajendra took Bhagamandala back into an independent Kodagu.

A short distance from the Triveni Sangama, there is a famous temple known as Sri Bhagundeshwara Temple which has idols of Bhagundeshwara (Shiva), Subramanya, Mahavishnu, and Ganapati. The Bhagundeshwara temple complex though said to have been built by the Cholas before the 11th century follows the gabled roof style of the Kerala temple architecture. The east-facing temple is enclosed with huge walls and facing east. A lot of additional work has been executed by various dynasties including the Wodeyars of Mysore. The wooden carvings are noteworthy which are present in the Sabha Mantapa situated right in front of Sri Subramanya and Sri Narayana temples.

A large number of tourists visit Bhagamandala particularly during the Thula Sankramana jatra and the entire Thula month (October-November). Thousands of oil lamps are lit in the temples during the festival.