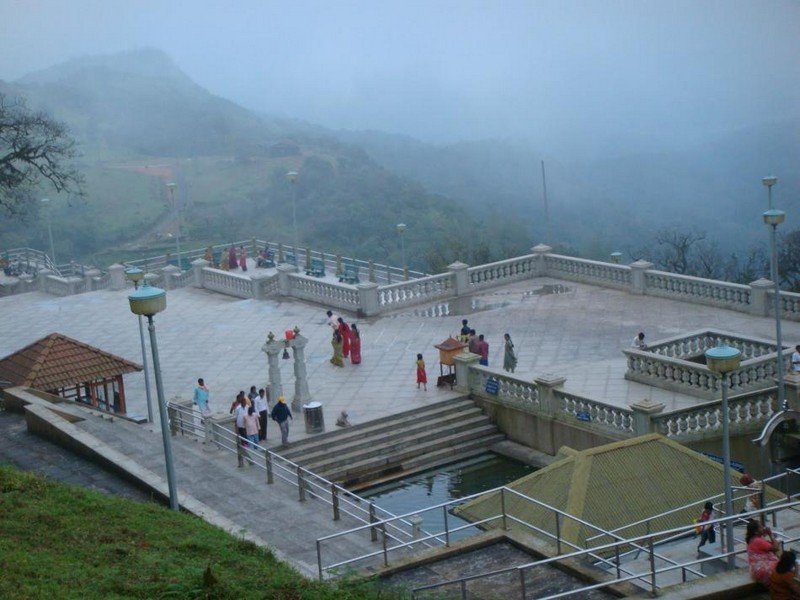 Travel Tips: Bhagamandala (8 Kms) is on the way to Tala Cauvery from Madekeri and can be visited together.

At a distance of 9 km from Bhagamandala & 44 km from Madikeri, Talacauvery is the origin of the Cauvery River in Karnataka. It is situated on the slopes of the Brahmagiri mountain ranges near Bhagamandala at an altitude of 1276 m. It is one of the best places to visit in Coorg and is among prime place to visit on a Coorg trip.

According to legend, Cauvery was held captive by sage Agasthya in a Kamandala, a pot carrying sacred water. Lord Ganesha in the form of a crow made the Kamandala to topple at this hill when Sage Agasthya was meditating. There is a shrine dedicated to Kaveri Amman near the kundike and a big tank in front of it where devotees baths before offering prayers. The temple was renovated by the state government in 2007.

Talacauvery also consists of shrines dedicated to Lord Agastheeshwara and Lord Vinayaka. The Shiva temple here houses a rare and ancient Shivalinga. According to the legend, this is the spot where Lord Shiva appeared before Sage Agasthya. The deity here is known by the name Lord Agastheeshwara.

Tula Sankramana which falls in October is the most auspicious day for visiting Talacauvery, as it is believed that on this day Goddess Cauvery appears on earth, which is indicated by a sudden upsurge of the water in the Cauvery (Brahma) Kundike. During this festival, the area becomes very attractive with thousands of lights lit in the temples. Taking bath at this spot on Tula Sankramana is considered very sacred.


Things to do at Talakaveri

Apart from being a pilgrimage place, Talacauvery is also a splendid place amidst breathtaking nature. The temple is situated in a breathtaking location in the lap of the Brahmagiri hills. The undulating layer of hills with stretches of green meadows is truly picturesque. There is a flight of steps leading up to the summit of the Brahmagiri Hill, which offers a feast for nature lovers.

The temple of Talakaveri is open through out the year. Winter & post monsoon are the best seasons to visit Talakaveri to witness the scenic beauty. Summer is the busiest season in Coorg and all tourist places including Talakaveru are usually crowded.

Talakaveri is usually open from 6 AM to 6 PM everyday including weekends and holidays. In case of heavy rains during monsoon, the route from Madikeri to Talakaveri may not be accessible and better to avoid visiting Talakaveri in case you are visiting Coorg in this season.


How to Reach Talakaveri

Talakaveri is about 44km from Madikeri town and well connected by road with different parts of Coorg as well as Kasaragod & Mangalore towns. The road leading to Talakaveri is very scenic and dotted with numerous coffee estates and several valleys & streams. You can have a stopover enroute for a beautiful photo session at any of the coffee plantations.
Get Directions
Go

Most Asked Questions on Talakaveri