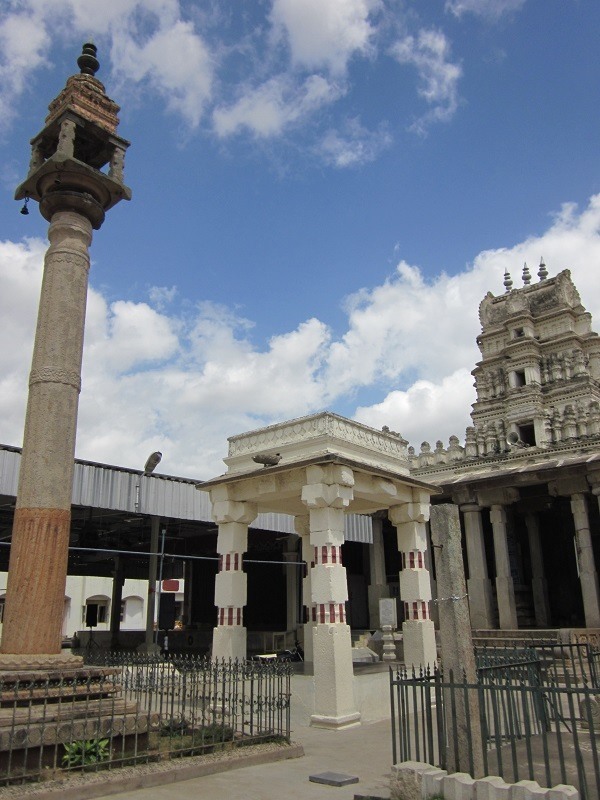 #4 of 22 Places to Visit in Shravanabelagola

Built in 1159 CE, this temple was erected by Bhandari Hullamayya, a general of Hoysala King Narasimha. The temple is a large structure measuring 155 ft x 232 ft. The temple exhibits great artistic skills of Hoysala rulers. The temple has a large manasthamba and an ornate mandapa in front of the entrance. The tower on entrance of the temple is small but nicely designed. The temple tower is erected on a pillared mandapa that houses few wooden carvings of a Jain Thirthankaras.

The main shrine is a rectangular structure with a 12 pillared sanctum, a rangamandapa and another mandapa called Saraswathi Mandapa. The rear side of the sanctum has a platform with carved images of 24 Jain Thirthankaras accompanied by Yaksha and Yakshis. There are four other shrines on either side of the rangamandapa. The navaranga has a beautiful image of dancing Indra. This temple was later removed in Vijayangara style.

Originally called 24 Thirthakara Temple, it was renamed as Bhavya Chudamani by King Narasimha and honored Hullamayya with title Samyaktva Chudamani. In an inscription, it is called Gomathapura Bhusana, meaning Charming Ornament of Gomathapura.

The annual car festival is help on full moon day in Chaitra month (March/April) and attracts large number of visitors.

Jain Math is situated on eastern side of the temple.