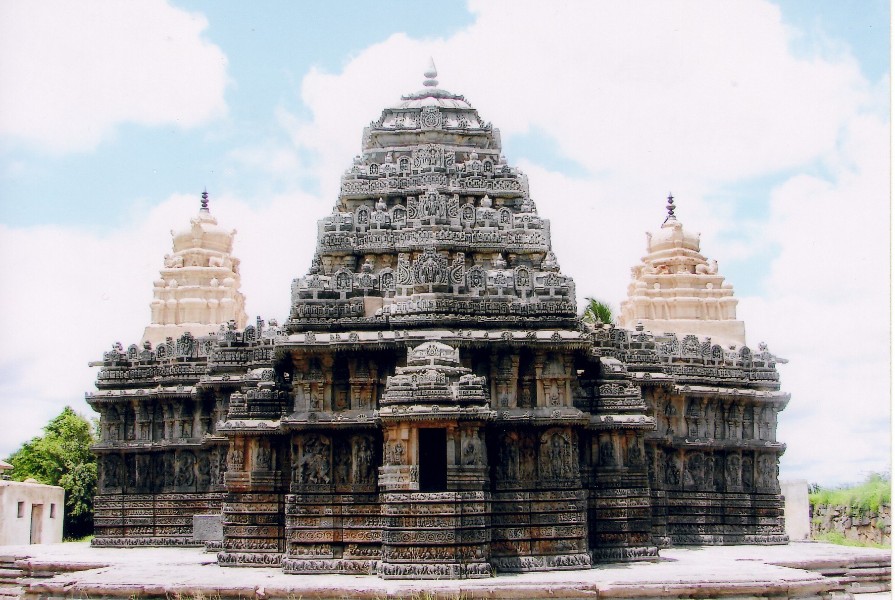 #12 of 22 Places to Visit in Shravanabelagola

At a distance of 29 km from Shravanbelagola, and 52 km from Hassan, Lakshmi Narasimha Temple is an ancient temple located at Nuggehalli in the Hassan district of Karnataka. It is one of the popular places of heritage in Karnataka, and among the must include places in Shravanabelagola Packages.

The Lakshmi Narasimha Temple at Nuggehalli was built in 1246 CE by Bommanna Dandanayaka, a commander in the Hoysala Empire during the rule of King Vira Someshwara. The town of Nuggehalli was called Vijaya Somanathapura in ancient times and gained importance as an agrahara (place of learning) during the time of Bommanna Dandanayaka. The temple is maintained by the people who reside around the temple area called Agrahara, an area donated to Brahmins by the ruling people in view of maintaining and performing poojas in the temples that they built.

Built with soapstone, the temple is a good example of 13th-century Hoysala architecture. The temple is dedicated to Lord Narasimha who is believed to be an incarnation of Lord Vishnu. Like other Hoysala temples, the Lakshmi Narasimha Temple at Nuggehalli is also built on an elevated platform called the jagati. The temple is constructed as a trikutachala i.e. it has three sanctums. The three shrines are located around a central closed mantapa with 9 bays. The ceiling of the closed mantapa is supported by four lathe-turned pillars which are deeply domed in the center.

The main temple is raised with a statue of Lord Narasimha in the northern sanctum, images of Kesava in the western sanctum, and images of Venugopala in the southern sanctum. The central shrine is the most prominent one and has a large tower and a vestibule that connects the shrine to the mantapa. The other two shrines have smaller towers and because they have no vestibule to connect them to the central mantapa, they have no sukanasi.

The walls of the Lakshmi Narasimha Temple are covered with intricate moldings and friezes in a horizontal treatment. These friezes are taken exclusively from the Bhagavatha. The lower eaves feature images of Hindu Gods and Goddesses with their attendants. In all, there are about 120 such sculptured panels. Below this, the wall is divided into 6 horizontal panels with two sections. These showcase elephant processions, horses, foliage, scenes from the Hindu epics, imaginary beasts, and hamsas. The intricate work on these panels is credited to Baichoja and Mallitamma, two well-known sculptures of the 13th century. The vimana tower is divided into three horizontal sections and is even more ornate than the walls. The images in the panels are mostly Vaishnava in faith and they are attributed to two well-known Hoysala sculptors, Baichoja and Mallitamma. There are a few images of the god Shiva in the form of Bhairava along with his consort Bhairavi.

Besides the Lakshmi Narasimha Temple, one can also visit Sadashiva Temple at Nuggehalli. Constructed by Bommanna Dandanayaka in 1249 CE, the temple is a fine example of the Hoysala nagara style of architecture with Bhumija type superstructure. The temple walls and the mandapa have an austere appearance, with no sculptural decoration. The temple is built on a jagati (platform) and the building material used is Soapstone. The temple houses a large linga in its sanctum and an equally large and extremely well carved Nandi in a closed hall with walls that have perforated stone windows. The temple also has a unique life-size standing image of the goddess Parvati (consort of Shiva). In the common hall are the intricately carved images of goddess Chamundeshwari, Kartikeya, Ganesha, Kala Bhairava, a set of images depicting the different incarnations of Parvati, and Surya Narayana.