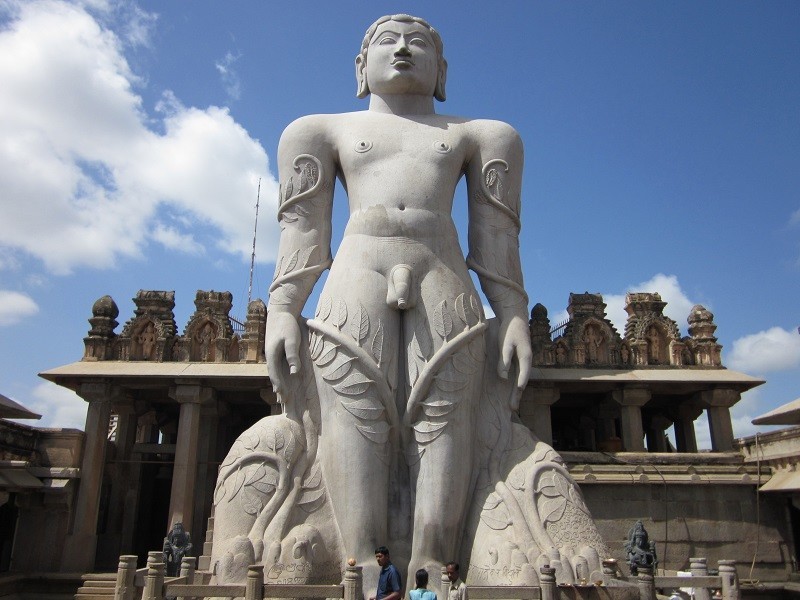 #1 of 22 Places to Visit in Shravanabelagola

The temple is built on top of a Vindhyagiri Hill at an altitude of 3347 feet. A flight of 620 steps provides access to this temple from the entrance near the pond. Gomateshwara Temple is among the prime places to visit in Shravanabelagola.

This image of Bahubali was created during the period of Chamundaraya, a minister of the Ganga King Rajamalla between 982 and 983 CE. The eyes of the statue are open as if viewing with work without any detachment. The statue has an anthill behind, representing Gomatha's long penance. Creeper emerges from the anthill adorning his legs and arms. The entire figure stands on an open lotus.

On either side of Bahubali, two standing figures of Chauri bearers called Yaksha and Yakshi appear in his service. There is a large pillared mandapa around the statue which has 43 carved images of Jain Tirthankaras. Gangaraja, a general of Hoysala king Vishnuvardhana has erected these mandapas. The bottom part of the statue has Kannada inscriptions. The main temple is surrounded by a large outer wall that has carved images of Jain figures, Monkeys, Lion, Fishes, Cow, and female figures carved all along the wall.

The Mahamastakabhishekam festival is held once in 12 years. The main attraction of this festival is the anointing of Lord Bahubali's statue with milk, curd, ghee, sugar, almonds, Kesar, and flowers. The next Mahamastakabhisheka will be held in Feb 2018. The marble statue of Chandra Natha Theerthankara placed in an enclosure within the same complex of Gomateswara Temple is beautiful.

It takes about 2-3 hours to climb up the hill, visit all monuments and come down. Dolis are available at the entrance of the hill that charge about Rs. 800 including return. Early morning is the best time to visit the hill. The hill offers beautiful view of the Shravanabelagola village, Temple pond and Chandragiri hill.