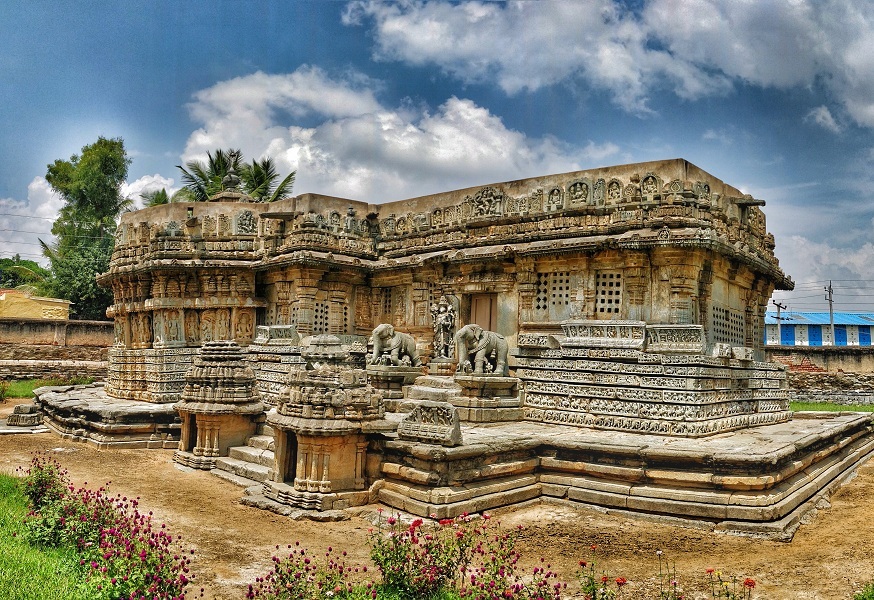 #16 of 22 Places to Visit in Shravanabelagola

At a distance of 32 km from Melukote, 53 km from Shravanabelagola, 65 km from Mysore, and 108 km from Hassan, the Mallikarjuna Temple is an ancient Hindu temple located at Basaralu in the Mandya district of Karnataka. It is one of the Hoysala temples in Karnataka and among the top places to visit in Hassan.

The Mallikarjuna Temple in Basaralu is dedicated to the Hindu god Shiva and was built by Harihara-dandanayaka in 1234 CE during the rule of the Hoysala Empire King Vira Narasimha II. Harihara and his two brothers consecrated god Mallikarjuna in the name of their father. They also constructed a tank nearby, in the name of their mother. This temple is protected and maintained by the Archaeological Survey of India.

Stands on a jagati or the raised platform, the Mallikarjuna temple is a highly ornate example of Hoysala architecture. Built-in the trikuta style (3 shrines), the temple faces east and consists of a Nandi-mandapa, navaranga, and antarala or sukanasi. The entry to the 3 shrines is through a common mandapa (hall). The sanctum sanctorum houses the Shivlinga representing god Mallikarjuna and the other two shrines have Surya and Nagas. The temple has only one shikhara built upon the sanctum sanctorum and is elaborately embellished with sculptures.

This temple has various distinctive features of the mature Hoysala period architecture. The base, like all Hoysala temples, has six layers of decorative moldings that comprise elephants, horse riders, lions, swans, leafy scrolls, various gods and goddesses, and scenes from Hindu epics like the Ramayana and Mahabharatha. The mid-section of the temple is richly decorated with sculptures of Shiva, Durga with twenty-hands, Mahishasuramardini, Vitthala, Surya-Narayana, Shiva as Tripurantaka, Sarasvati, Gajasamharamurti, Arjun, Hayagriva, Krishna, and Vamana.

To the east of the temple stands a 16 feet high pillar, on top of which was a figure of a male and female. Only the figure of a female has survived. This pillar is uninscribed, but deriving similarity to a pillar in Hoysaleshvar temple at Halebidu.