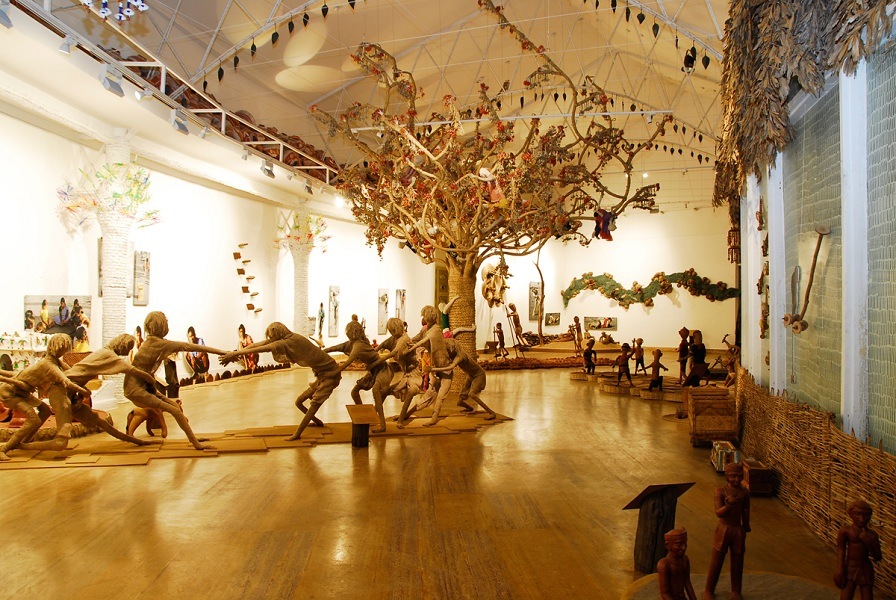 At a distance of 8 km from Bhopal Junction, Madhya Pradesh Tribal Museum is a museum located at Shyamla Hills in Bhopal, Madhya Pradesh. Situated just beside State Museum, it is one of the popular museums in Madhya Pradesh, and among the prominent Bhopal Tourist Places.

The cultural tapestry of Madhya Pradesh is woven with varied art, craft, architecture, and customs as it is home to several tribal communities such as the Gonds, Baigas, and Bhariyas. The Tribal Museum in Bhopal brings to life the culture of these tribes through full-scale models and colorful art installations and performances. Established in 2013, the museum was created and dedicated to the tribal people of Madhya Pradesh.

Spread across 7 acres of land, the museum is divided into 6 colorful galleries showing the diversity of the seven tribes of the state - the Bheel, Gond, Korku, Baiga, Sahariya, Bhariya, and Kol. The artistic displays are mesmerizing as it creates awareness about the tribal rituals, customs, forms of worship and so on. The first gallery was the place for the traditional mud and brick houses of the tribes. The exterior of the houses had colorful murals and paintings. This gallery is a visual delight and provides a good insight into the tribal life, their way of living, the basic tools they use, how they cook and preserve the food grains.

The Tribal Aesthetic Gallery exhibits the rituals of the tribes depicting the circle of life - birth, marriage, and death. The traditions attached to these festivals and sacred rituals are depicted here beautifully. A part of the gallery is full of bamboo and wooden figurines and forests have been recreated to tell the Gond folklore of 'Basin Kanya' - a mythical story about how bamboo originated. One can see a model of a brass bangle with six-feet in diameter having figurines of cattle and farmers. It is the enlarged version of a bangle that is gifted to a Bhil woman on her marriage.

The Spiritual World Gallery is perhaps the most stunning visually and fascinating as well. The exhibits of this gallery symbolize the afterlife, the mystical and spiritual world of the tribes. The memorial pillars, terracotta sculptures, tridents, earthen lamps, Meghnad Khamb of Korku tribe, Sarag Naseni of Gonds, Gal Bapsi, Tatal Devi's place of Bhils, Dev Gudi of Murias, and Maharani Khamb of Baiga make the understanding of the importance of the divine power in a tribal man's life easy. The next gallery is dedicated to the state of Chhatisgarh while the last gallery displays different games - Traditional tug-of-war, Ghoda Badam Shahi, indigenous wrestling. Tribal Museum also holds an auditorium, a small boutique shop of artifacts, and a restaurant.