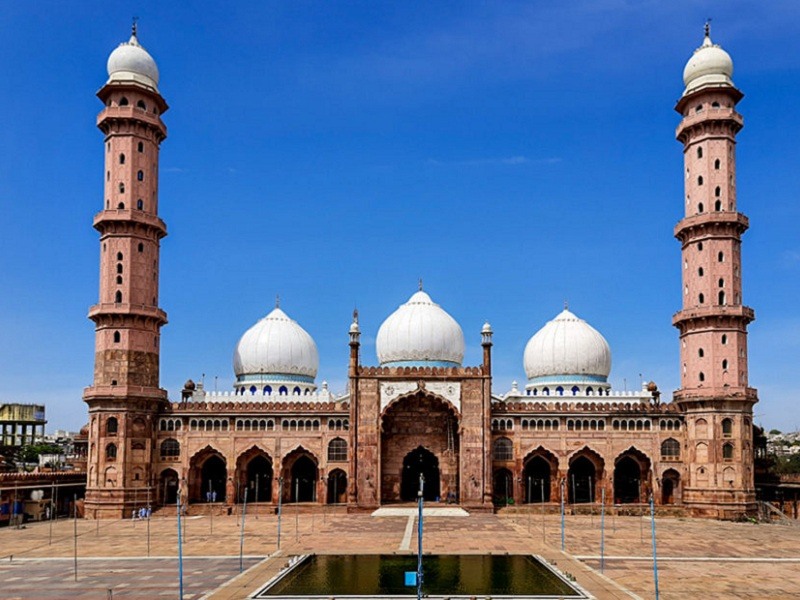 Place Location: In The Heart Of Bhopal City

Travel Tips: The masjid is open on all days, but non-Muslims are not allowed inside on Fridays.

At a distance of 4 km from Bhopal Junction, Taj-ul-Masajid, or Taj-ul-Masjid is a 19th-century mosque located at the heart of Bhopal city in Madhya Pradesh. It is one of the largest mosques in India, and among the must include places in Bhopal Trip.

Literally means 'The Crown of Mosques', the Taj-ul-Masjid is one of the largest mosques in Asia. The construction of the mosque was initiated by Nawab Shah Jahan Begum of Bhopal (1868-1901) during the reign of the Mughal Emperor Bahadur Shah Zafar and continued to be built by her daughter Sultan Jahan Begum, till her lifetime. But the mosque was incomplete due to lakh of funds. After a long lay-off, its construction began once again in 1971 and was completed by 1985. The entrance (eastern) gate was renovated grandly using ancient motifs from circa 1250 Syrian mosques by the contribution of the Emir of Kuwait to commemorate the memory of his departed wife.

A classic illustration of Mughal architecture, Taj-Ul-Masajid is sprawling over an area of 23,912 sq. ft, and built with red sandstone. The mosque has 27 interlinked ceilings, 16 of which are adorned with petal motifs. The beauty of the mosque is enhanced by three stark white bulbous domes on its rooftop. The main prayer hall of the mosque is beautifully designed with petal decorations and ornate pillars. Two 67m tall minarets covered with a white dome each guard the mosque on both sides. A rectangular walled complex with a huge open courtyard and water tank envelops the aura of the mosque.

Every year, Alami Tablighi Ijtima, a three-day congregation used to be organized at Taj-Ul-Masjid, but it has since moved to Islam Nagar because its popularity grew so much that even the large mosque proved too small for hosting the event.