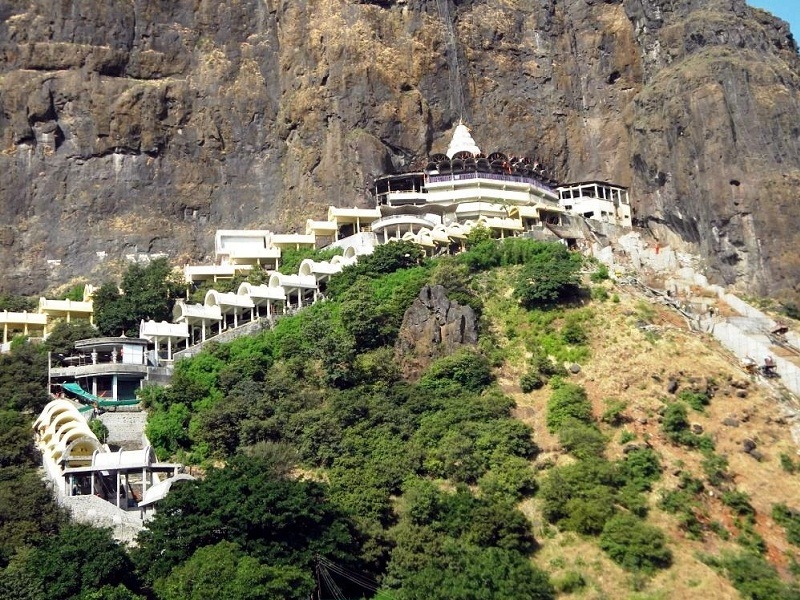 At a distance of 26 km from Vani and 65 km from Nashik, Saptashrungi Devi Mandir is a Hindu temple situated near Nanduri village. The temple lies atop the cliff with an altitude of 1,230 m.

The temple is dedicated to Goddess Saptashrungi. The temple is known popularly as one of the 'three and half Shakti Peethas' of Maharashtra. The temple is also one among the 51 Shakti Peethas located on the Indian subcontinent and is a location where one of Sati's limbs, her right arm is reported to have fallen. It is also believed that the presiding deity of the temple is Mahishasur Mardini, who was the slayer of the demon Mahishasur. At the foot of the hill lies the head of a buffalo, made of stone, which is believed to be that of the demon.

Saptashrungi Temple is a two storied shrine with the Devi enshrined in the top floor. The goddess idol is said to be swayambhu (self-manifested) which was carved on a rock on the sheer face of a mountain. She is surrounded by seven (sapta-in Sanskrit) peaks (shrunga-in Sanskrit), hence the name- Saptashrungi Mata (mother of the seven peaks). The image of Devi is huge-about 10 feet tall with 18 hands, holding various weapons. The idol is always coated with Sindoor, which is considered auspicious in this region. The Devi is decorated with high crown, a silver nose-ring and necklaces.

The most important festival of the Saptashrungi temple is Chaitrotsav. The festival starts on Rama Navami and culminates on Chaitra Poornima (full moon day), the biggest day of the festival. The festival is also attended specifically by childless women making vows seeking blessings of goddess for children. About 250,000 attend the festival on the final day and as many as 1 million gather on the last three days of the nine-day festival. Dussehra and Navratri are also celebrated with great pomp and fervor at this temple.

A path has been cut out from the mountains to form steps that lead to the temple. Now, a motorable road has been built, which goes up to an altitude of 1150 m. From that place one has to climb only 470 steps to reach the shrine, which only takes about 45 minutes. There is also a trolley system for those who are not able to climb the steps.