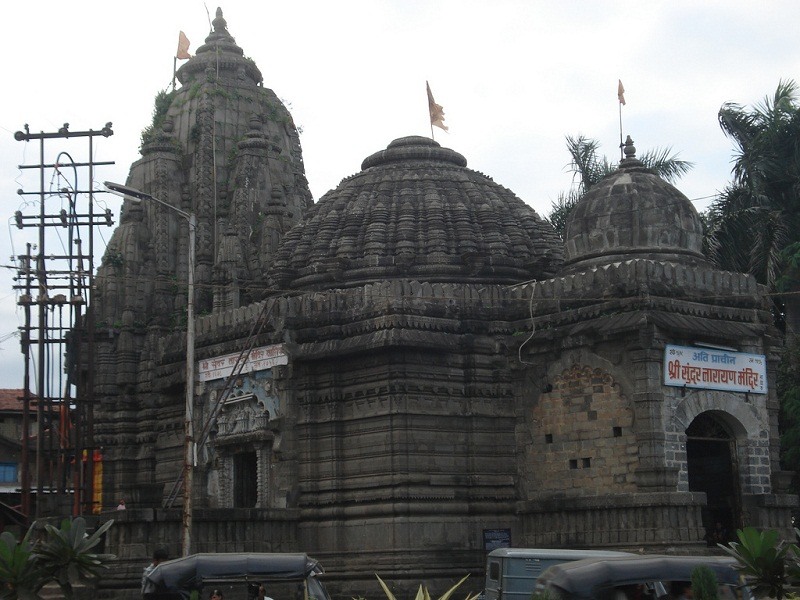 At a distance of 2 km from Nashik Central Bus Station, Sundarnarayan temple is situated at the corner of Ahillyabai Holkar Bridge near Ram Kund in Panchavati area of Nashik.

The Sundarnarayan Temple is built by Gangadhar Yashwant Chandrachud in 1756. The presiding deity of the temple is Lord Vishnu as Sundarnarayan. According to legend, once the area was a place haunted by an evil demon named Jalandar who was an ardent devotee of Lord Shiva. Even though the demon was wild and practiced evil deeds, he had a pious and virtuous wife Vrinda Devi. Lord Shiva was highly impressed by his devotion and he blessed the demon with a boon of immortality. This boon made Jalandar to create destruction in the area.

The Gods realized the importance to kill the demon to save the mankind. The Gods approached Lord Vishnu to help them in this noble cause. Lord Vishnu understood that the chastity and piousness of Jalandar's wife is acting as a shield to his life. Lord Vishnu adopted the look of Jalandar and started living with his wife. He challenged the chastity of the women and killed Jalandar. When Jalandar's wife Devi Vrinda came to know this, she cursed Lord Vishnu to turn black and ugly. The curse of the lady made him dark and he had to take a holy dip in River Godavari to regain his original form. After regaining his original form, Lord Vishnu was called Sundarnarayan.

The temple presents imposing architecture especially the vaulted niche, which strikes a chord with the Mughal sculpture. The east-facing temple has three porches with balcony, lobed arches and globular domes. The main deity Lord Vishnu flanked by Lakshmi and Saraswati is placed in the sanctum. There are small carvings of Hanuman, Narayana and Indira on the walls. The most remarkable thing about this temple is the angle at which it is built. The sun rays of rising sun first fall directly on the idols on March 21st every year. Thousands of devotees visit this temple on this day to witness this holy event.