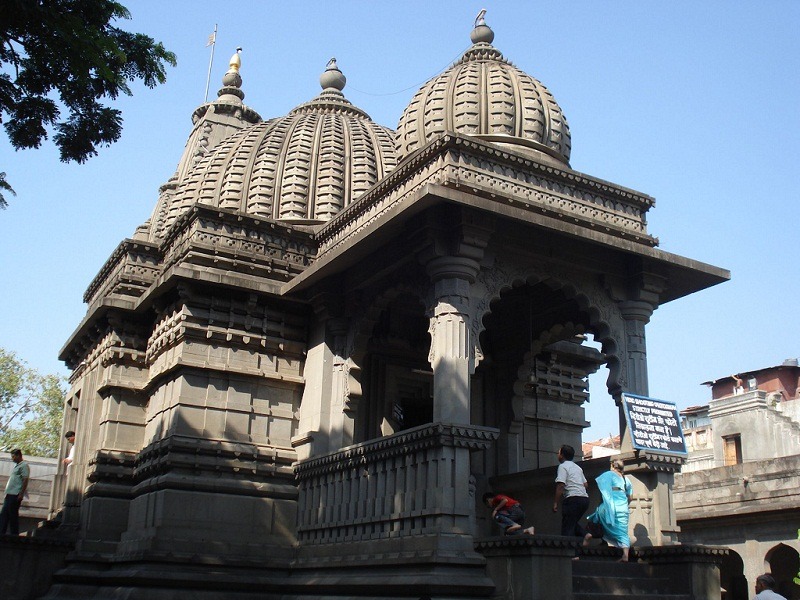 At a distance of 2.5 km from Nashik Central Bus Station, Sri Kalaram Temple is an old Hindu shrine situated in the Panchavati area of Nashik city in Maharashtra. It is probably the most important temple in Nasik, and among the must include places in Nashik tour packages.

Kalaram Temple is dedicated to Lord Rama, who has been enshrined inside the sanctum sanctorum in the form of a black stone idol. It is one of the important places to visit in Nashik. The temple was built by Sardar Rangarao Odhekar in 1790 AD. It was said that Odhekar had a dream that the statue of Rama in black color was in the Godavari River. Odhekar took the statue from the river and built the temple. The temple formed a pivotal role in the Dalit Movement in India. Dr. Ambedkar led a protest outside the temple on 2nd March 1930, to allowing Dalits into the temple.

The architectural design of this temple is similar to the temple of Trimbakeshwar. The temple has been constructed completely out of black stones and four entrance doors, one each facing East, West, South, and North. The temple is surrounded by an enclosure that comprises 96 pillars. The stones used in the construction of the temple were brought from Ramshej. It took almost 12 years to complete, with the help of over 2000 workers. Kalaram Temple is around 70 feet high and has a gold-plated peak. The summit of the Kalaram Mandir is made up of 32 tons of gold.

The idol of Lord Rama as well as of Lakshmana and Sita are carved out of black stone, hence the temple got its name, Kalaram, meaning black Ram. At the entrance, there is an idol of Lord Hanuman, which is also carved out of a black stone. There is an impression of the footprint on a stone near an old tree which is thought to be the footprints of Lord Dattatreya. The temple is surrounded by several smaller temples such as the Vithal Temple, Ganapathi Temple, and Maruti Temple. Pilgrims also visit the Kapaleshwar Mahadev temple and Sita Gufaa near the Kalaram Temple. The festivals of Ramnavami, Dussehra, and Chaitra Padwa (Hindu new year day) are celebrated with much fanfare at the temple.