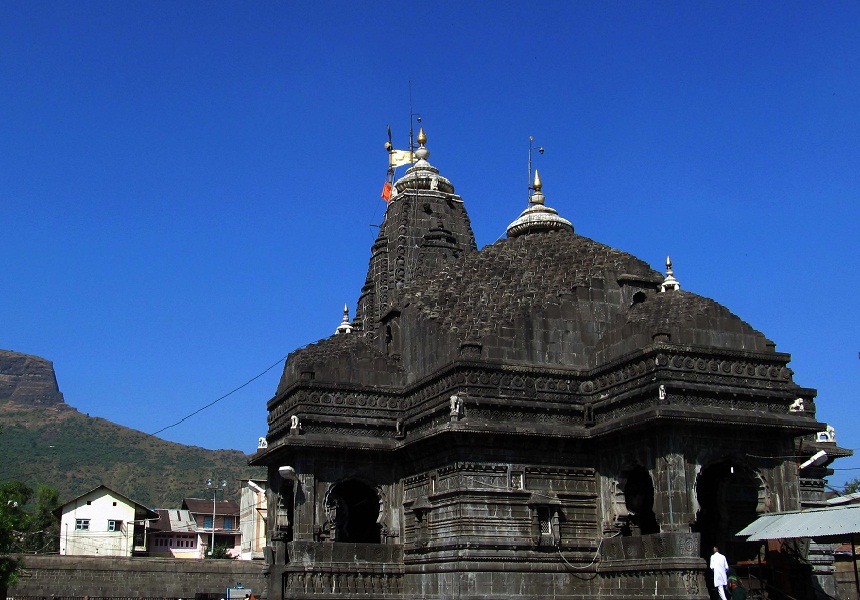 At a distance of 28 km from Nashik, Trimbakeshwar or Tryambakeswar is a small pilgrimage town located on the banks of River Godavari at the foothills of Brahmagiri Mountains in Nasik district of Maharashtra. It is one of the popular places of pilgrimage in Maharashtra, and among the must-include places in Nashik packages.

Trimbakeshwar is famous for Trimbakeshwar Temple which is one of the 12 Jyotirlinga temples of Lord Shiva. It is one of the most famous places to visit near Nashik. Trimbakeshwar Temple is built by Sri Nana Saheb Peshwa in 1755-1786 AD. The presiding deity of the temple is Lord Shiva as Trimbakeshwar. The extraordinary feature of the Jyotirlinga located here is its three faces embodying Lord Brahma, Lord Vishnu, and Lord Rudra. A crown studded with precious stones rests on top of this Linga, which is said to be from the age of Pandavas. This crown is decorated with various precious stones like emeralds, diamonds, and many other varieties. The crown is displayed every Monday from 4 PM - 5 PM. It is one of the most popular places to visit near Mumbai.

The temple is built of black stone in the Nagara style of architecture and is enclosed in a spacious courtyard. The sanctum internally a square and externally a stellar structure houses a small Shivlingam - Tryambaka. The sanctum is crowned with a graceful tower, embellished with a giant amalaka and a golden kalasha. In front of the garbagriha and the antarala is a mandap with doors on all four sides. The entire structure is ornamented with sculptural work featuring running scrolls, floral designs, and figures of gods, yakshas, humans, and animals. The Shivlingam is seen in a depression on the floor of the sanctum. Water constantly oozes out from the top of the Shivalingam.

Kushavarta, a sacred pond in the temple premises is the source of the Godavari River, the longest river in peninsular India. As per legends, Trimbakeshwar was the place of 'Tri-Sandhya Gayatri' where Lord Ganesh was born. It is also believed that Trimbakeshwar was the abode of the revered sage Gautama. Gautama to get relieved of the sin of gohatya worshipped Lord Shiva at Brahmagiri Mountain for the down-flow of the River Ganges. The wish was granted and Goddess Ganges took the form of River Godavari and originated from Kushavarta of Brahmagiri Mountain. This says that anybody who visits Trimbakeshwar attains salvation.

Gangadwar, Brahmagiri, Caves of 108 Shivalingams, Parashuram temple, Bilwa Tirtha, Gautama Tirtha, Indra Tirtha, and Ahilya Sangam Tirtha are some other places that can be visited in Trimbakeshwar. It also has several ashrams devoted to Ashtanga Yoga, the Hindu art of living. It is also famous for lots of religious rituals such as Narayan Nagbali, Kalsarpa Shanti, Tripindi Vidhi, etc. Of these, the Narayan Nagbali ritual is performed only at Trimbakeshwar.