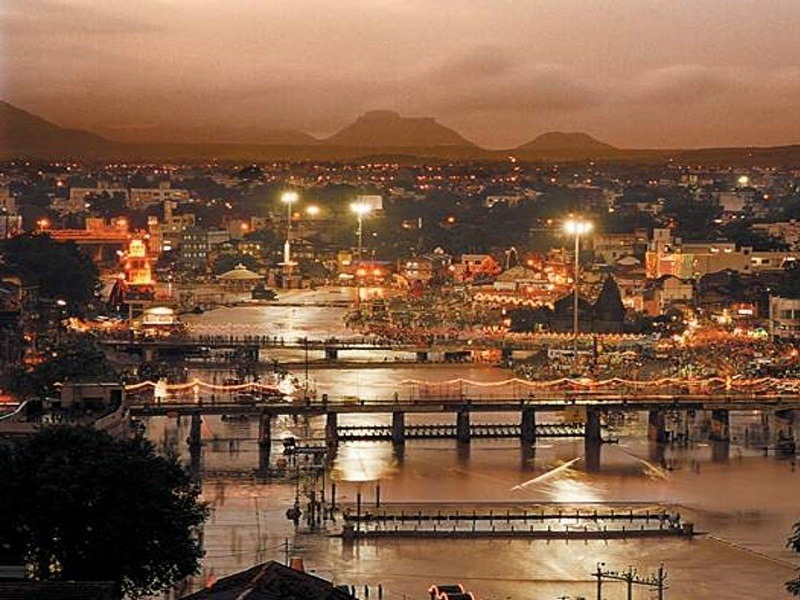 At a distance of 90 km from Shirdi, 180 km from Aurangabad, 182 km from Mumbai, 211 km from Pune and 234 km from Surat, Nashik or Nasik is a religious city located in the northwest region of Maharashtra in India and is the administrative headquarter of the Nashik district. Nashik is the third-largest city by population in Maharashtra and also one of the popular pilgrimage places to visit in Maharashtra.

Nashik is one of famous places to visit near Aurangabad. Situated at an altitude of 700 m, Nasik has been called the Wine Capital of India and is situated on the banks of River Godavari. Nashik is famous for its numerous temples constructed during the reigns of different rulers that can be visited as part of Nashik holiday packages.

According to legend, Lord Rama, along with his wife Sita and brother Lakshmana stayed here for a while during their 14-year exile. It is believed that the name Nashik comes from the episode of the Ramayana where Lakshmana hacked off the nasika (nose) of Shurpanaka, Ravana's sister. Alternatively, the city has also preserved a tradition of a proverb in Marathi which states that it was settled on nine peaks.

Nashik has been the center of commerce and trade in India since the historical past. Nashik became very prosperous during the era of the Satavahanas as it lay on the trade route to Broach (Gujarat). The city was under the ruling of the Mughals in the 16th century and was renamed Gulshanabad. It is also famous for its contribution to the struggle for independence of India. This is the birthplace of well-known independence fighters like Veer Savarkar and Anant Laxman Kanhere.

Panchavati, Someshwar, Ram Kund, Muktidham Temple, Coin Museum, Pandavleni Caves, Sinnar, Anjaneri, and Trimbakeshwar are some of the prominent Nashik places to visit. Apart from its religious importance, Nashik has numerous vineyards that dot the countryside and is known as the wine capital of India. Some of the vineyards allow tours and provide courses on grape cultivation and identification of different wines and how to savor them.

Kumbha Mela, the largest religious gathering held once every 12 years, is one of the most important festivals celebrated in Nasik. A large number of pilgrims, sadhus, and holy men attend this magnificent fair and take bath in the holy river Godavari. Ramnavami Rath Yatra is another famous festival celebrated with great pomp and fervor in Nashik.

The best time to visit Nashik is from October to March while the peak season is from November to February.

How to Reach Nashik - Full Details

Top 10 Places to Visit in Nashik

At a distance of 2 km from Nashik Central Bus Station, Ramkund is the most important sacred bathing tank in the Panchavati area of Nashik City. This is one of the popular places to visit in Nashik during Kumbh Mela.

Ram Kund, measuring 27 x 12 sq. m was built by Chitrarao Khatarkar in 1696 AD. According to the legend, this sacred bathing tank on the bank of river Godavari is believed to be the spot where Lord Rama had taken his bath during their exile. It is also said that Lord Rama has performed his father's funeral rites in this Kund and hence Ram Kund is also known as Asthi Vilaya Tirtha (Bone Immersion Tank). This is one of the must-visit places as part
of Nashik tour packages.

Ram Kund is a holy place for Hindus. Devotees believe that a dip in this tank will fulfill their wishes and also free them from their sins. There is a popular belief .....

At a distance of 9 km from Nashik Central Bus Station, Muktidham is a marble temple complex located at Deolali Gaon on the suburbs of Nashik. It is one of the popular tourist attractions in the city of Nashik.

Muktidham Temple complex was built by Late Sri JayramBhai Bytco in 1971. An abode of most of the gods and goddesses of the Hindu religion, this splendid shrine displays the replica of all the 12 Jyotirlingas of India. It is believed that a holy darshan of this shrine provides as much virtue as a visit to four holy places, which makes this magnificent shrine a crowded pilgrim center.

It is a magnificent piece of architecture, made with white marble from Makran in Rajasthan. There is a temple dedicated to Lord Krishna in the Muktidham complex. The walls of Krishna temple have paintings depicting scenes from life of Krishna and Mahabharata. These were painted by a noted painter Raghubir Mulgaonkar. Unique to this temple are eighteen chapters of Bhagavad-Gita written on the .....

At a distance of 15 km from Nashik Central Bus Station, Sri Dharmachakra Prabhav Tirth is a beautiful Jain Temple situated near Viholi village on Nashik - Mumbai Road. This is one of the top Nashik tourist places and also one of the popular pilgrimage places in Nashik.

Sri Dharmachakra Prabhav Tirth was established under the divine inspiration of Acharya Sri Jag Vallabh Surishwaraji Maharaj Saheb. This recently built temple is popularly called as Jain Mandir. This is a three-storey structure whose architecture is unlike the other Jain temples has completely new and contemporary outlook. The temple is built using the pink sand stones and white marbles which beautifies the feel and the look of the temple.

The three storey temple consists of a Pravachan Hall on ground floor where meditations and sermons take place, Choumukhji on the first floor and Ashtapadji on the third floor. A statue of Sri Mantradhiraj Parshwanath Bhagwan is the main idol (mulnayak) of the temple. The temple .....

At a distance of 2.5 km from Nashik Central Bus Station, Sri Kalaram Temple is an old Hindu shrine situated in the Panchavati area of Nashik city in Maharashtra. It is probably the most important temple in Nasik, and among the must include places in Nashik tour packages.

Kalaram Temple is dedicated to Lord Rama, who has been enshrined inside the sanctum sanctorum in the form of a black stone idol. It is one of the important places to visit in Nashik. The temple was built by Sardar Rangarao Odhekar in 1790 AD. It was said that Odhekar had a dream that the statue of Rama in black color was in the Godavari River. Odhekar took the statue from the river and built the temple. The temple formed a pivotal role in the Dalit Movement in India. Dr. Ambedkar led a protest outside the temple on 2nd March 1930, to allowing Dalits into the temple.

At a distance of 2.7 km from Nashik Central Bus Station, Sita Gumpha or Sita Gufaa is situated near Kalaram Temple in Panchavati area of Nashik. It is one of the top pilgrimage places to visit in Nashik.

Sita Gumpha is believed to be the place where Sita worshipped Lord Shiva during their exile. The cave, containing the idols of Lord Ram, Sita and Lakshmana, can be accessible only through the help of a narrow staircase. The ancient Shivlinga still exists in the cave and is visited by large number of devotees every day. Devotees believed to be the place where Ravana, the demon king of Lanka, abducted Sita.

Outside the cave is a large grove of 5 very old Banyan trees, after which the area is named, Panchavati means 'a garden of five banyan trees'. These trees are said to have been there during the exile of Lord Rama. There is a place called Tapovan where Lakshmana, the brother of Rama, cut off the nose of Surpanakha, the sister of Ravana. The entire Aranya Kanda of Ramayana is .....

At a distance of 28 km from Nashik, Trimbakeshwar or Tryambakeswar is a small pilgrimage town located on the banks of River Godavari at the foothills of Brahmagiri Mountains in Nasik district of Maharashtra. It is one of the popular places of pilgrimage in Maharashtra, and among the must-include places in Nashik packages.

At a distance of 2 km from Someshwar Temple and 9 km from Nashik Central Bus Station, Someshwar Waterfalls is a breathtaking waterfall situated near Gangapur in the suburbs of Nashik. It is one of the popular waterfalls in Maharashtra, and among the must-visit places as part of Nashik tour packages.

Also known as Dudhsagar Waterfalls, Someshwar Waterfalls is one of the most favorite tourist places in Nashik. This small and beautiful waterfall is formed over the holy River Godavari. The height of the waterfall is 10 m and the place turns very picturesque during the monsoon as there is a huge water flow and also a lot more greenery around. It is a much-loved picnic spot by families and preferred stop by youngsters, to spend a relaxed evening. There is also a Balaji Temple near the waterfall which is a .....

At a distance of 8 km from Nashik Central Bus Station, Pandavleni Caves or Trirashmi Caves are the ancient rock cut caves situated on Trirashmi Hills to the south of Nashik. The location of the caves is a holy Buddhist site in Maharashtra and also one of the popular places to visit in Nashik.

Pandavleni Caves are a group of 24 caves carved between the 3rd century BC and the 2nd century AD, representing the Hinayana Buddhism and has nothing to do with the characters of Mahabharata (the Pandavas).These caves were built by the rulers of that time like Satavahanas and Kshaharatas for Hinayana Buddhist monks. More ancient name of caves is Trirashmi Caves where the root 'Trirashmi' means 'triple royal'.

Most of the caves are Viharas except for the 18th cave which is a Chaitya. Caves 3, 10, 18 and 20 are the most significant and fascinating caves among the 24 caves which are noted for their magnificent sculptures. Cave 3 has a large Vihara with fascinating sculptures. Cave 10 is also .....

At a distance of 2 km from Nashik Central Bus Station, Sundarnarayan temple is situated at the corner of Ahillyabai Holkar Bridge near Ram Kund in Panchavati area of Nashik.

The Sundarnarayan Temple is built by Gangadhar Yashwant Chandrachud in 1756. The presiding deity of the temple is Lord Vishnu as Sundarnarayan. According to legend, once the area was a place haunted by an evil demon named Jalandar who was an ardent devotee of Lord Shiva. Even though the demon was wild and practiced evil deeds, he had a pious and virtuous wife Vrinda Devi. Lord Shiva was highly impressed by his devotion and he blessed the demon with a boon of immortality. This boon made Jalandar to create destruction in the area.

The Gods realized the importance to kill the demon to save the mankind. The Gods approached Lord Vishnu to help them in this noble cause. Lord Vishnu understood that the chastity and piousness of Jalandar's wife is acting as a shield to his life. Lord Vishnu adopted the look of .....

At a distance of 7 km from Nashik Central Bus Station, the Someshwar Temple is located on the banks of River Godavari at Someshwar in the suburbs of Nasik.

Someshwar Temple is one among the oldest temples dedicated to Lord Mahadeva in Nashik. Besides Shiva, the temple is also the abode of Lord Hanuman. The temple is surrounded by greenery, which provides an idyllic ambiance to this pretty shrine.

The temple premise also possesses a boating club and a small children's park providing recreation. The riverbeds here are very suitable for swimming and boating. The temple is visited by large number of people throughout the year.