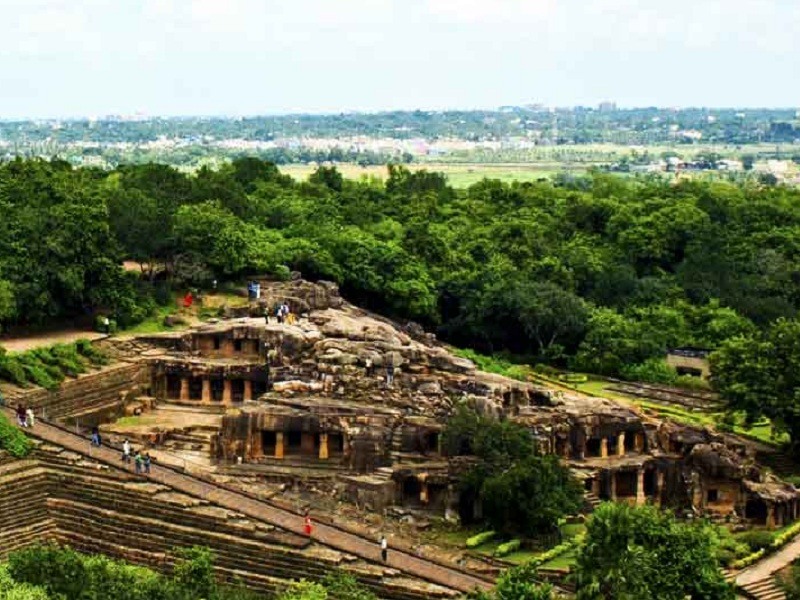 #4 of 22 Places to Visit in Bhubaneswar

At a distance of 9 km from Bhubaneswar Railway Station, Udayagiri & Khandagiri are two ancient Jain rock-cut caves located in the vicinity of Bhubaneswar. Called as twin hills caves, these caves are one of the most popular places to visit in Bhubaneswar and also one of the best places of heritage in Odisha.

There are total 33 rock-cut caves on both the hills out of which 18 caves are excavated on Udayagiri hill while 15 are on the Khandagiri hill. The name Udayagiri means Hill of Sunrise. The Rani Gumpha or the Queen's Cave is the largest and the architectural marvel of the entire complex. It is a two storied monastery supported by many columns and terraces. The cave contains beautiful sculptures of dancing women, royal entourage, and musical instruments. In Udayagiri, Hathi Gumpha (Cave 14) and Ganesha Gumpha (Cave 10) are especially well known due to their sculptures and reliefs as well as due to their historical importance. Hathi Gumpha contains carved chronicles of King Kharavela's reign - the famous Hathi Gumpha inscription.

Of the 15 Caves in Khandagiri, Ananta Gumpha (Cave 3) is the most impressive one. The cave is named after carvings of two serpents on the entrance. The carvings on the walls of the cave depict figures of women and children, athletes, lions, bulls and many other animals. The Navamuni Gumpha (Cave 7) carries sculptures depicting 9 Jain Tirthankaras while the Barabhuji Gumpha has two relief images of twelve armed Sasana Devis. There are few Tirthankara sculptures also found in this cave. Khandagiri offers a fine view of Bhubaneswar from its summit.