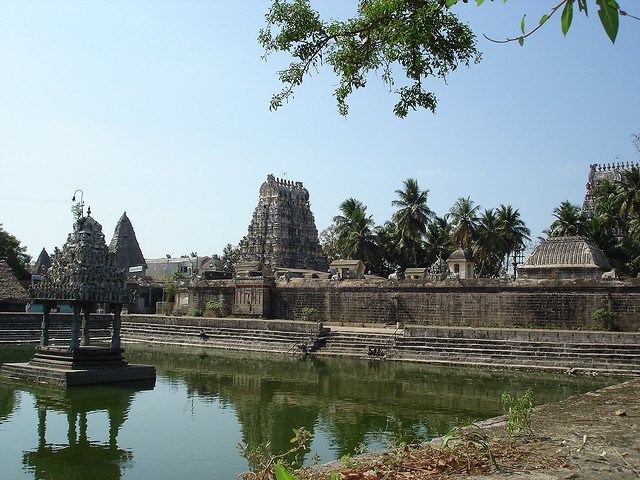 #21 of 29 Places to Visit in Pondicherry

At a distance of 750 m from Villianur Railway Station and 8 km from Pondicherry Bus Station, Sri Kokilambal Thirukameshwara Temple is an ancient temple located at Villianur in Pondicherry and is popularly known as Villianur Temple.

This temple was constructed by a Chola king in the 12th century CE. According to the history, the king was suffering from leprosy and worshipped Lord Shiva in this temple and got cured. The King built a town in this place which was earlier a forest of Vilwa (Bel) trees and constructed the temple and named it Vilwanallur which gradually changed to Villianur.

Dedicated to Lord Shiva in the form of Thirukameshwara, the goddess of this temple is known as Kokilambal. The lingam is made of mud and abhishekas are not performed to the linga directed. Instead, the lingam is covered with brass armor before abhishekas. The rays of the Sun fall on the presiding deity in the month of Panguni (March/April). The Nandi in this temple is called Prasava Nandi and women pray the bull before their pregnancy delivery, which is a significant feature of the temple. Though Nandi is usually installed facing Shiva, there is another smaller Nandi placed before this Big Nandi. Lord Murugan, Lord Brahma, Lord Narasimha, Adisesha and Lord Govinda are the other shrines housed in this temple.

The temple has several beautiful pillars with carved images. The temple has two majestic towers, exquisitely designed and sculptured.

The temple is very famous for its annual temple car festival, which is celebrated for ten days in the month of May to June. The God is taken out for the procession in a 15 meter tall chariot. The devotees believe that their wishes are to be will be fulfilled if they pull the chariot. Devotees offer curd, sandal and buttermilk as the offering to the god.