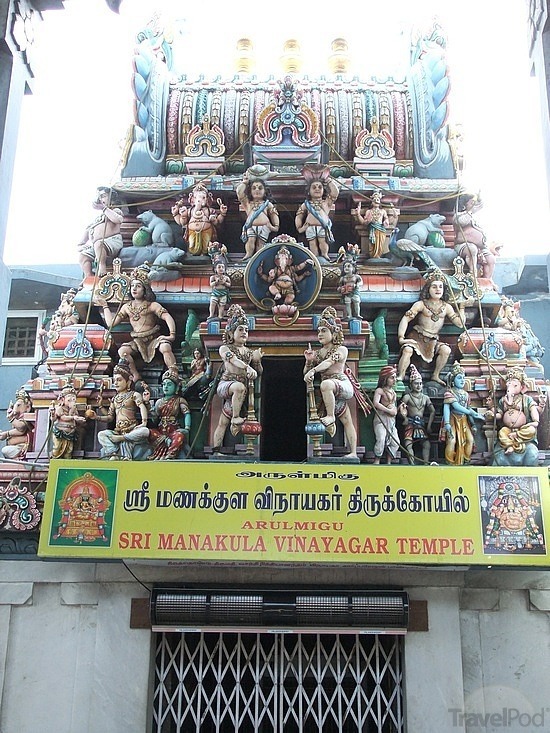 #9 of 29 Places to Visit in Pondicherry

At a distance of 3 km from Pondicherry Bus Station, The Manakula Vinayagar Temple is one of the famous ancient temples dedicated to Lord Ganesha and is a popular pilgrimage site in Puducherry.

Manakula Vinayagar Temple was in existence before the French came and settled in Pondicherry and the idol of Lord Ganesha is locally known as Vellakkaran Pillai. The French Jesuits and missionaries tried to demolish the temple several times, but every time local population saved the temple.

Facing the east near Bay of Bengal, the temple was known as Bhavaneshar Ganapathy, now called as Manakula Vinayagar. In Tamil Manal means sand and Kulam means pond near the sea. The temple is spread over an area of about 8000 sq. ft with outer mandapam, raja gopuram and outer enclosure. Measuring 18 feet in height, the gold plated kodikambam is a spectacular highlight of this temple. The outside wall of the temple depicts various forms of the Ganesha with its timelines and locations. The rich architectural beauty of the shrine is enhanced by a golden vimana.

The idol of the Lord Ganesha stands here beautifully, facing towards east, along with his consorts Buddhi and Siddhi. The idol rests on a golden chariot. The use of teak wood and gold racks gives an exquisite look to the chariot. Around 7.5 kilograms gold was used in the making of the chariot. Every year during Dussehra, this chariot is carried out for procession. The temple also features a dancing Ganesh called Narthan Ganapathy.