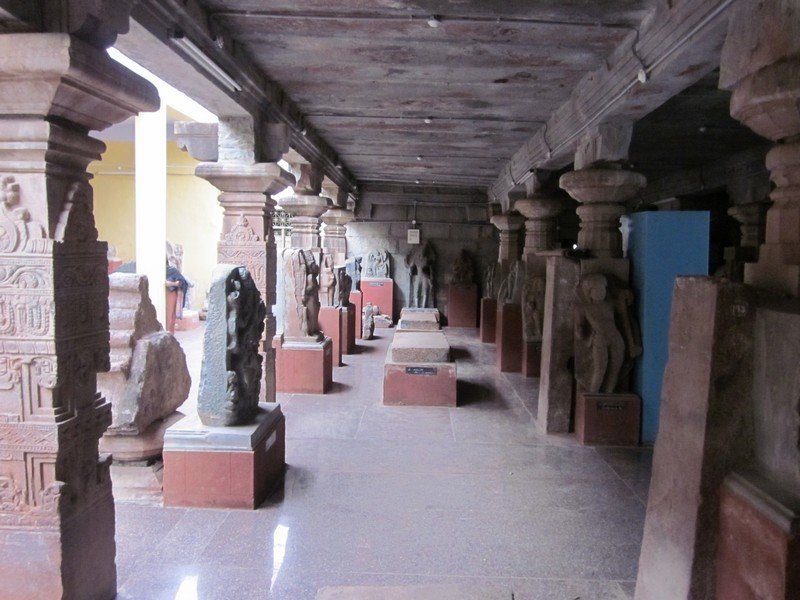 At a distance of 1 km from Alampur Bus Station, Archeology Museum situated at the entrance of the Bala Brahma Temple complex houses wonderful collection of sculptures and inscriptions recovered from the Navabrahma Temples and surroundings of Alampur.

Started in 1953 by then Vice President of India Sarvepalli Radhakrishnan, the museum consists of 188 sculptures and 2 inscriptions. These artifacts are dated between 6th and 16th centuries. The museum is a large hall with an open air section at the center and a small enclosure towards the eastern side. All the artifacts are spread across the hall.

Some of the important sculptures in the museum include 7th century Surya, Nataraja, Lord Vishnu, Subrahmanya with Valli, Siva & Parvathi riding on Nandi, Saptamatrukas, Nagabandhas, Mahishasura mardhini, Nagnanaka Bandha, Ashtadikpalakas, Nagas among others. The Surya sculpture, one of the Nataraja figures along with a Mahishasura mardhini is the highlight of the museum. The Surya sculpture has participated and won several awards in International Art Exhibition in Germany in 1984. The Nataraja sculpture with 8 hands from 11th century is beautifully carved. Mahishasura mardhini from 7th century is wonderfully carved which showcases different facial expressions from different angles.

The sculpture of Nandi carrying Siva & Parvathi is one of its kind and rarely appeared scene. Ashtadikpalakas figures are similar to those of Papanasi temples. Nagnanaka Bandha represents Renuka Devi in nude and women seeking children perform pooja to Renuka Devi. Similar sculpture exists in Bala Brahma temple where poojas are performed by women on Tuesdays. There are several figures of warriors in the museum. Some of these figures showcase warriors being taken to Heaven after their heroic death in the war.

The stone inscriptions explain the rich history of the region. The inscriptions are from the Chalukyas, Rashtrakutas, Kakatiyas and Vijayanagara rulers. The initial inscriptions were a mix of Kannada and Telugu script. Some of the inscriptions have drawings of Surya, Chandra, Shivalinga, Cow and a knife, which means all the donations should only go to Shiva as long as Surya and Chandra exists and stealing these donations is equal to the sin of killing a cow.