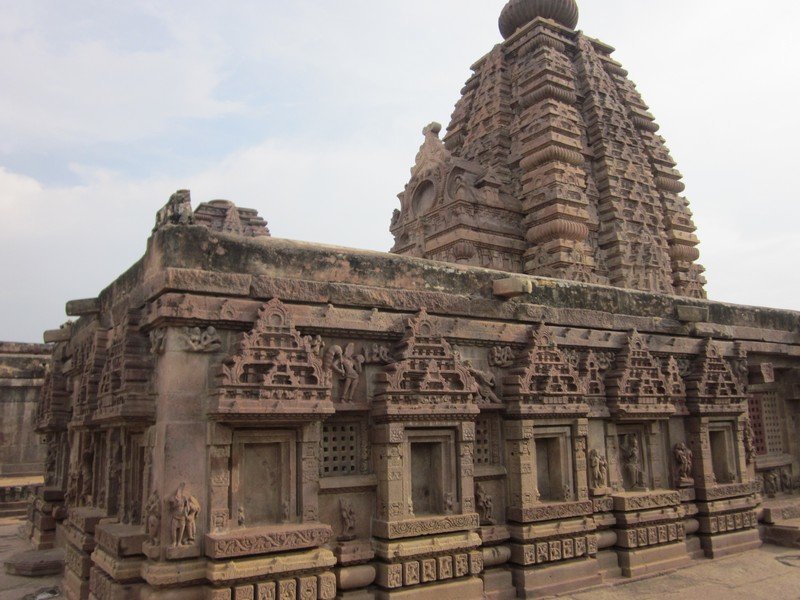 At a distance of 1 km from Alampur Bus Station, Vishwa Brahma Temple is the best preserved temple after Bala Brahma temple among Navabrahma temples. This temple hosts wonderful carvings throughout the structure.

Situated towards northern corner opposite to the museum beside Vira Brahma temple, architecture of this temple resembles that of Galaganatha Temple in Pattadakal. The temple boasts a large mahamandapa with 18 pillars followed by the sanctum. Built on an elevated platform, there is no mukhamandapa in this temple. Inner sanctum has a circumambulatory path for pradakshinas. The sanctum is supported by four pillars with carvings of Ramayana scenes, Gandharvas, Lions, etc. The ceiling has wonderful carvings of Nagabandha and lotus. The doorway of the sanctum has images of Gajalakshmi, Ganga and Yamuna along with their vehicles Crocodile and Tortoise.

The circumambulatory path around sanctum has few good images of ducks with two heads. The pillars in the mahamandapa have attractive floral designs. Built in nagara style, the vimana of the temple is intact and well preserved.

The doorway of the main entrance has Garuda riding chariot. The outer walls of the temple have some best art work. Backside of the sanctum has wonderfully carved Bhagiradha performing penance to bring Ganga to earth. There are several images of Lord Vishnu, Nataraja, Ganesha, Surya, Chandra, Gandharvas, Yakshinis, among others. The mini mandapas carved out on the outer walls are attractive. Majority of the statues in these placeholders can be found in the museum. There is also an interesting carving of two cranes carrying a tortoise.